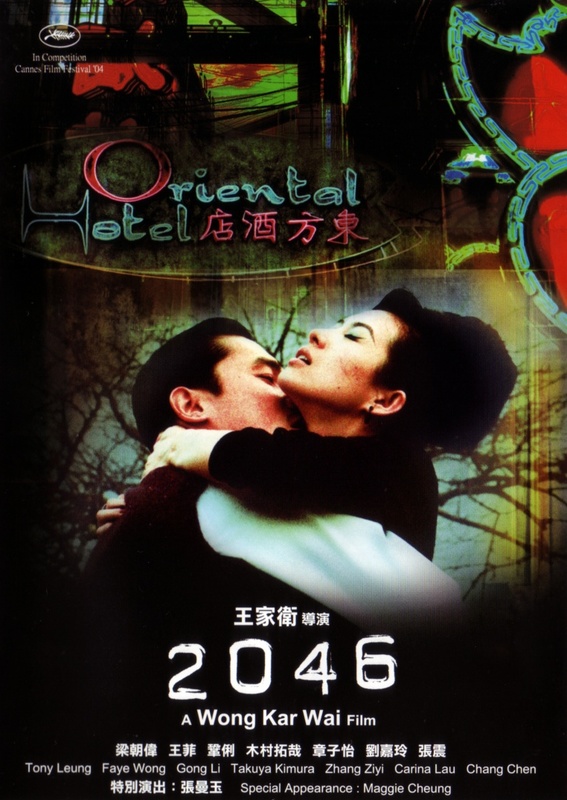 Due to contractual obligations and his lacksadaisical approach to film shooting, Wong Kar-Wai had to begin work on 2046 whilst he was still working on In The Mood For Love. He found that he couldn't keep the two projects separate in his head, and parts of one kept crossing over into the other, until he eventually decided they were both different aspects of the same film and should be treated as such. After reaching this decision, you'd think it would be quite straightforward to produce 2046 once ITMFL was wrapped. For some reason it took him another 4 years, leading more than one HK film to conjecture that 2046 was actually when he planned to release it.

I suspect that what really happened was that WKW realised some time after finishing ITMFL that it really didn't need a second part, but he'd already started shooting 2046 as one and kept trying to make it work - a case of round peg, square hole, I suspect. There must have been some point during those 4 years where somebody could have said "Look, this was obviously a bad idea, forget what you said before and just make 2046 a stand-alone film". But they didn't, or couldn't, or did but nobody listened.

Since IN THE MOOD FOR LOVE was already a very loose follow-up to Wong's second film, Days of Being Wild, 2046 can be considered the 3rd part of a trilogy. The film actually makes more explicit reference to the earlier film, with Carina Lau returning as the same character she played in 1990 (having skipped ITMFL), and a scene of Tony Leung's character getting ready for a night out almost explicitly tying his characters together across all three films. Numerous details point out the fact he is the same Mr Chow that he played in ITMFL, but he seems to have had something of a personality transplant. In ITMFL he was a somewhat repressed, semi-tragic fellow, but 2046 sees him hopping from bed to bed in a manner more reminiscent of Leslie Cheung's character in DOBW. One supposes that his experiences in ITMFL changed him, left him a little damaged perhaps, but it could be argued at least as convincingly that he's just not quite the same character he was before, or that 2046 takes place in a slightly different universe to ITMFL. There's a lot of bed hopping in 2046 - in fact much of the film's running time seems to involve either the lead-up, fall-out or execution of some bed-based trysting. Wong quite famously cut the love scene he filmed for ITMFL out of the final version because he felt it didn't need to be shown, made explicit or dwelled upon. Apparently he didn't feel the same way about any of the love scenes in 2046, which leaves little to the imagination or the gods of ambiguity.

Maggie Cheung barely appears in the film, having a very brief cameo as Su Lizhen (Mrs Chan) and another brief cameo as a robot in 2046, which turns out to be the name of a story that Tony's character is writing, set in 2046 (which may be the name of a place as much as it is a year, though it's all ambiguously symbolic). Since Maggie's not around much, this time it's Zhang Ziyi's turn to have the camera linger on her in a series of high-necked dresses, or out of them as the circumstances require. There's no possible room for argument that she looks fabulous whatever she's wearing, and she seems quite comfortable giving a fairly raunchy performance (I suspect Maggie would not have been so uninhibited). Faye Wong makes an appearance in the film, possibly in some vague atttempt to bring Chungking Express into the Menage a Trois, though there's no particular suggestion that her characters are related in the two films. Her story isn't given all that much screen time, but she gets much longer shrift than either Dong Jie (blink and you'll miss her) or Gong Li (whom Wong Kar Wai somehow manages to make unattractive, and whose character seems largely pointless in the film). Wong Kar-Wai managed to assemble an almost unprecedented collection of the most attractive and esteemed Asian actresses for the film, but doesn't seem to have had much idea what to do with them (apart from Zhang Ziyi).

That pretty much sums up 2046 for me... Wong just doesn't seem to have known what to do with the film, or why he was making it. He brings up references to DAYS OF BEING WILD (e.g. the bird with no legs) and IN THE MOOD FOR LOVE (e.g. whispering secrets into a hole) but then doesn't seem to have anything to add. Cinematographer Christopher Doyle has observed this himself, suggesting that 2046 was "unnecessary" (and that WKW realised that himself during production).

Of course there's pretty images, with some expert cinematography that places the viewer in mostly voyeuristic positions, glimpsing the characters in reflection or half-hidden by the environment or each other. The aim is clearly to create the feeling that we are spying on the characters private lives, not even a fly on the wall so much as a peeping tom. ITMFL was apparently supposed to put the audience in the role of one of the neighbours, catching fragmented parts of the main characters lives and developing suspicions about what was going on behind closed doors. 2046 makes us much more proactive observers, witnessing the characters most private moments, even violating the privacy of their own heads thanks to the return of Wong's trademark voice-overs. Even with this extremely privileged perspective, I was still mostly at a loss what Wong wanted us to learn from the experience. That the path of love ne'er runs straight or true? Yes, we knew that already thanks.

The conclusion that I'm forced to reach is that Wong didn't really have much of a plan for the film, and found himself reaching for ideas through reference to his early work rather than looking for something new to say. It may be that the film was originally meant to be set entirely in 2046, which is significant because it's the year when China's 50 year "hands off" policy for Hong Kong expires, and the territory will become fully integrated with the mainland. I wish he had gone with this, because the 2046 scenes were very pretty and Faye Wong makes a great robot. However, he still doesn't seem to have had anything in particular to say in those scenes, so a full film of them might still have been very boring.

Well, there I've gone and said it - 2046 is to me a very boring film. I felt very little attachment to the characters or interest in their love lives, troubled as they may have been. Within 30 minutes the fast forward button on my remote control was starting to look almost as attractive as Zhang Ziyi, and by about 50 minutes my resolve broke and I used it fairly liberally for the remainder of the film when my tedium threshold was exceeded. I just went to double speed, still enough to read the subtitles and follow everything that happened easily enough, and dropped back to normal play speed when things looked a bit more interesting or Zhang Ziyi's clothes fell off. There weren't really enough moments of either though, so I finished the film in under 2 hours (normal speed running time is about 130 minutes). It might be unfair for me to criticise a film when I've not given it a proper chance to work its mojo, but honestly I couldn't possibly have finished it without cheating a bit.

And when a film featuring Zhang Ziyi, Gong Li and Maggie Cheung is still borderline unwatchable, that's actually quite an achievement :p Still, at least I only felt like I'd wasted 2 hours when the film finished - Wong Kar-Wai seems to have wasted 4 years :(

It'll be interesting to see what Wong comes up with next - hopefully he's not going to stay stuck in this rut he's got himself into. Rumour has him tackling a biopic of Bruce Lee next, which is certainly different, but it's hard to imagine the subject being an ideal match for his particular style(s) and method(s). Personally I think he should go back to wu xia fiction, and see if he can produce anything even remotely as good as Ashes Of Time again.