Directed by
Genre
A nostalgic Meta-Western 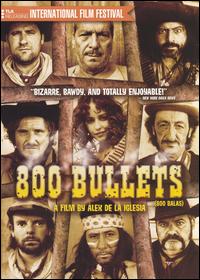 Decades after the last spaghetti western was filmed in Almeria, Spain, a Wild West theme park entertains small groups of tourists with its recreation of the glory days of Cowboys and Indians on the silver screen. A young boy learns that his father was a stuntman in these films until an accident on set killed him, and that his grandfather now runs the theme park. He catches a ride out to Almeria to learn about the father he never knew.

800 BULLETS is something of an odd one out in Alex De-la Iglesia's filmography, more sentimental and restrained than most of his work. It is a film about nostalgia that works on multiple levels, nostalgia for a past that never really existed and for childhood where fantasy was allowed to run free... and for its last refuge in the adult world, cinema.

Grandfather and grandson are both romantics in their own way, seeking escape in fantasy and refusing to submit to modern life where "getting ahead" grinds people down, always sacrificing life's little pleasures in the pursuit of something they either never attain or which doesn't bring them happiness when they do.

Eventually the titular 800 bullets are all that stand between the theme park and a corporate development project. There's really only ever one way this clash between a fantasised bygone era and the cold, hard modern world is going to end... going out with guns blazing. Yee haw!

A last stand that reminds us that sometimes we all need fantasies to keep us going.