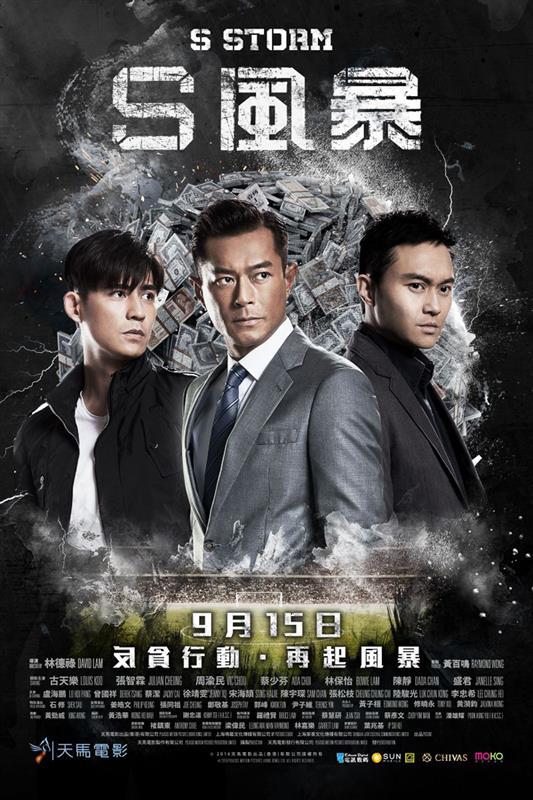 The ICAC receive a tip-off that somebody at the Hong Kong Jockey Club is involved in bet fixing on football matches, but before they get chance to investigate the suspect an assassin on a motorbike puts a bullet through his head. Reasoning that there must have been more people involved, and the anonymous informant is now their only lead, they set out to find out who it is. Since there's been a murder, the police also get involved in the case, and of course there's friction between them and the ICAC.

Z Storm was a mediocre film at best, and I was baffled as to how it had managed to produce four sequels. Suddenly I wondered if maybe the second film was vastly better and thereby turned around the franchise's fortunes? Well, that was S STORM, and it wasn't.

I'm not sure if it's better or worse than Z ... probably a bit of both. Cinematography seems a little more polished this time, so the film feels higher budget, but the script is at least equally awful and it doesn't have Michael Wong hamming it up to lighten the atmosphere. It does have a gang of gweilo villains straight out of the 1980's though, so there's that at least.

Louis Koo seems broadly unengaged with his character. Dada Chan returns but as a completely different character (though filling broadly the same role in the plot). Terence Yin has the good sense to be killed before his smugness becomes unbearably irritating (i.e. he's in the film for about 2 minutes)..Some guy I don't recognise plays a Cambodian hitman who is still traumatised by his memory of being a childhood soldier - which is odd since he must be at least 20 years too young to have been around in the Cambodian civil war.

There's a bit more action this time around, I think, but it's still not very good.

The ICAC are still portrayed as being reliably incorruptible and efficient, but S doesn't feel quite as much like ICAC-funded propaganda as Z did. I honestly can't think of any other explanation for there being FIVE of these films though?

Maybe the third one is good?