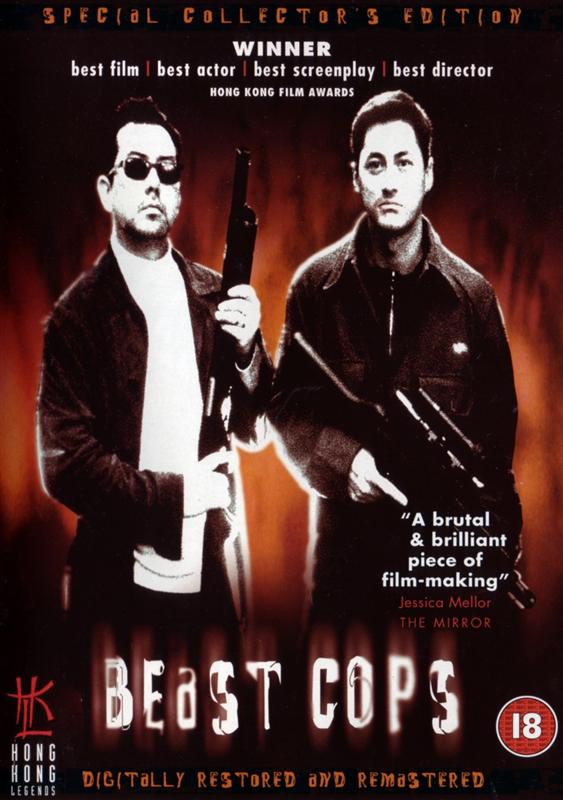 I first saw this at a mini-HK festival a few years ago, not long after it came out. At the time I thought it had some interesting bits but was quite boring to sit through. Anthony Wong was in attendance though, and turned out to be a thoroughly decent chap. I'd considered picking up the DVD for a while, but the high price tag put me off. I decided to borrow a copy this weekend though, and found that the intervening years have prepared me much better to appreciate the movie. Co-directed by Gordon Chan and Dante Lam, I think it shows a lot of the latter's influence, having seen his solo efforts since. The movie is very intelligent and subtle, with a very knowledgable bending of genre conventions that Lam would later pursue to much greater extremes in Jiang Hu and Runaway. Whilst those movies bend conventions to the extent of being parodies, here the treatment is much more delicate, and if you don't know your genres well you will most likely miss it.

The movie begins as a kind of 'day(s) in the life' movie of cops Anthony Wong and Sam Lee working in Tsim Sha Tsui, where the boundaries between Triad and Cop are decided blurred. The law of the government is given very little respect, but the overall system works. Roy Cheung is the Triad big brother who keeps the law of the Triad which ensures this is so. Former SDU member Michael Wong turns up on the scene with some very different attitudes to law and order.

"For some people there is a large grey area in life, but for me there is only a line between black and white".

Lam & Chan focus on the characters in this scenario and give them plenty of time to develop, letting the "story" build very very slowly. They manage to pull out a definite career best performance from Anthony Wong, and even Michael Wong is likeable here. Other characters such as the ditzy mama-san Kathy Chow and ambitious young triad Patrick Tam are also given a lot of depth, though I never made sense of Stephanie Che's character (I couldn't help noticing that every female character in the movie was a prostitute, although in Stephanie's case it wasn't quite clear cut). The scenarios and dialogue are very well scripted, with devilishly subtle black humour throughout. Cinematography and soundtrack are also superlative. The movie avoids the pitfall that some of Lam/Chan's SDU dramas fall into of simply being 'day in the life' movies with an action ending tacked on - whilst you might not realise it for a while, the story is being built up piece by piece until it shifts into full gear about 30/40 minutes before the end. There's no sense in spoiling what happens here, but suffice to say that there is adequate payoff

The movie won a few HK awards on its release, and when I first saw it I wasn't quite sure why. Now that I have the viewing experience behind me to recognise the multitude of genius touches the movie contains, I would quite happily give it awards in pretty much every category. Definitely one of the best movies to come out of Hong Kong in the past 5 years.