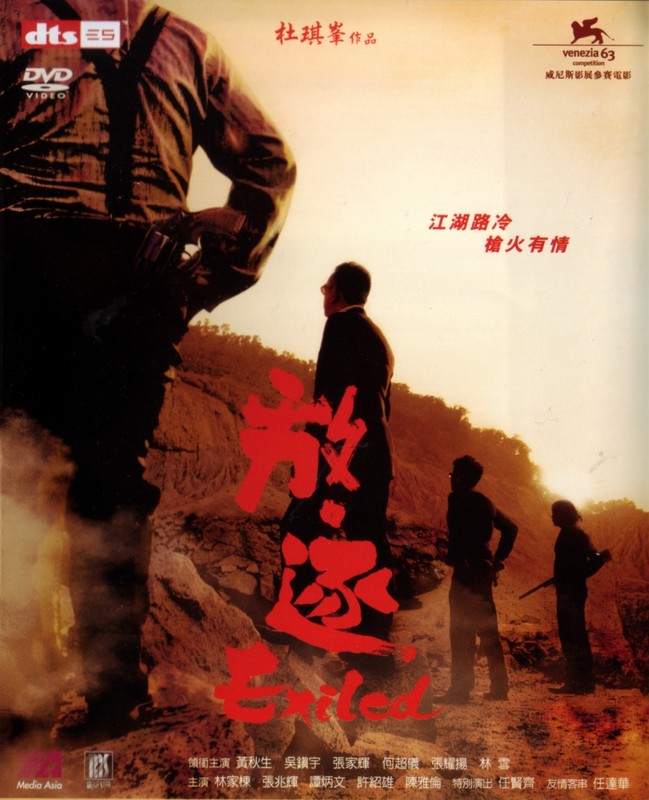 A group of old friends cross paths under less than ideal circumstances - one of their number has a hit placed on him by their former boss, and two of them are there to carry it out - the other two to stop it.

EXILED is a sort of spiritual sequel to Johnnie To's masterpiece The Mission - most of the core cast return, playing similar roles, in a story that could be thought of as an alternate-universe sequel, or a riff on a theme, or something like that. The setting moves to Macau, and the cinematography and soundtrack move with it, but the films share connections on a less tangible level. A little bit of A Hero Never Dies might have gotten mixed in there too.

In short, EXILED is a gangster film that remembers just how freaking cool a group of guys with guns can be when they're played by great actors, and directed by a visual stylist who trusts those actors (and the audience) to tell his story without needing to cosh us over the head with expository dialogue, foreshadowing and all those tricks that less talented writers and directors think will make them look like they know what they're doing.

I've been a bit disappointed by the last few Johnnie To films - i.e. the ELECTIONs - and thought his late 90's heyday was definitely passed. EXILED is the closest film to the pre-NEEDING YOU Milkyway Image that he's produced this millenium, and the To film I've enjoyed the most since Running On Karma. It's great to see the stellar cast given chance to do their thing again - especially Francis Ng, who seems to have been on vacation from gangster movies for a few years (after once being ubiquitous in them). Nobody else does it like him. It's worth mentioning once again that Nick Cheung has completely transformed since his early-ish days, into somebody I actually look forward to seeing now. EXILED is possibly his best role yet. Josie Ho usually takes interesting roles and does them well, and that's definitely the case here too.

THE MISSION had a really unique, innovative approach to gunplay. EXILED's gunplay has a somewhat similar style, though not quite as 'pure' - there's more motion, and some of the scenes get quite chaotic. Perhaps it could be considered an evolution of the style, though it's an evolution that takes it more towards other HK gunplay. That's not necessarily a fault - the shootouts in EXILED are exceptionally good (glad to see To hasn't succumbed to the CG squib yet!).

Maybe comparing EXILED to THE MISSION is a distraction, since it's not really a sequel, but it's hard for me not to compare it to one of my top 10 HK films. Happily, EXILED does not disappoint even with the burden of expectation that such a comparison brings. Johnnie To's best in years, and I think the 2nd best HK film of 2006 (Fearless still wins).