Directed by
8/10 - Budget constrained but imaginative 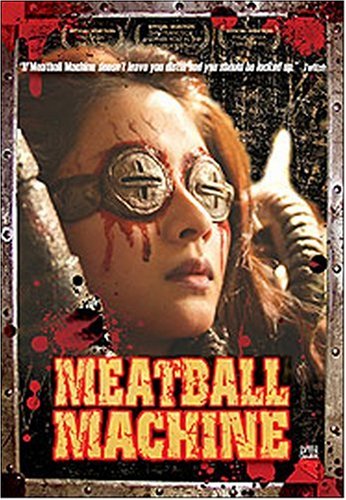 A young factory worker leads a lonely existence, fantasising from afar about the kindly looking woman in the neighbouring factory who takes her lunch at the same time as him. More importantly, though, aliens are invading. Only a few of them though, and it's a fairly low key invasion. As a parasitic race they use their machines to infect and take over a host's body, and then pilot their transformed human hosts in a fight to the death, with the emergent victor consuming their defeated foe as their prize.

I first watched MEATBALL MACHINE as part of a wave of Japanese films with special effects by Yoshihiro Nishimura that I discovered in the wake of The Machine Girl, and found it to be rather disappointing in comparison. In retrospect that was unfair though, as it came out three years earlier and is a quite different sort of film.

I recently re-watched MEATBALL MACHINE because I really enjoyed the 2017 remake Meatball Machine: Kodoku and wanted to see how they compared (I had forgotten pretty much everything about the original). It turns out they are very different - whilst KODOKU is quite similar in tone and style to THE MACHINE GIRL, MEATBALL MACHINE is an altogether darker and more serious affair. It's clearly very low budget, shot on video and with the special effects being more a triumph of imagination than realism.

Seeing it with fresh eyes after all these years, though, I recognise that it is quite a special film in its own right. The film-makers clearly had a vision, and clearly worked hard to realise it with not nearly enough money to realistically do so. They lucked out in getting Yoshihiro Nishimura involved, since nobody is able to do special effects on a budget like he does, and the result is a film which is quite impressive and unique.

Not entirely unique though, as it turns out the 2005 film is itself a remake of a 1999 film by director Junichi Yamamoto. The UK DVD includes the original film as a special feature, but edited down to a 13 minute short. This was probably a wise move, as if the 2005 film is low budget the 1999 film is no-budget. From the little we get to see it's clear that the two films have the same vision (and probably much the same plot), but the involvement of Nishimura and co-director Yudai Yamaguchi evidently helped to bring the vision to life in a more convincing way second time around.

It would also be remiss not to mention the debt the films owe to Shinya Tsukamoto's seminal Tetsuo: The Iron Man. Whilst it's probably fair to say that every independent Japanese film made since 1989 owes a debt to TETSUO in some way, the connection is explicit here with the theme of human transmogrification, and the cinematography and editing are pure Tsukamoto at times.

Taken on its own terms there is a lot to like about MEATBALL MACHINE, even if you do sometimes have to let yourself see what they were trying to do rather than what they actually managed to do. That's not to say that the effects never hit home, some of them are truly impressive, and it was likely his work here and in the short spin-off MEATBALL MACHINE: REJECT OF DEATH that paved the way for Nishimura's work on films like THE MACHINE GIRL and Tokyo Gore Police - and eventually to revisit this idea in MEATBALL MACHINE: KODOKU.

KODOKU is definitely the better film in most respects, and certainly the special effects, but MEATBALL MACHINE deserves credit for being out there ahead of its time, and for achieving what it set out to do as well as it did.