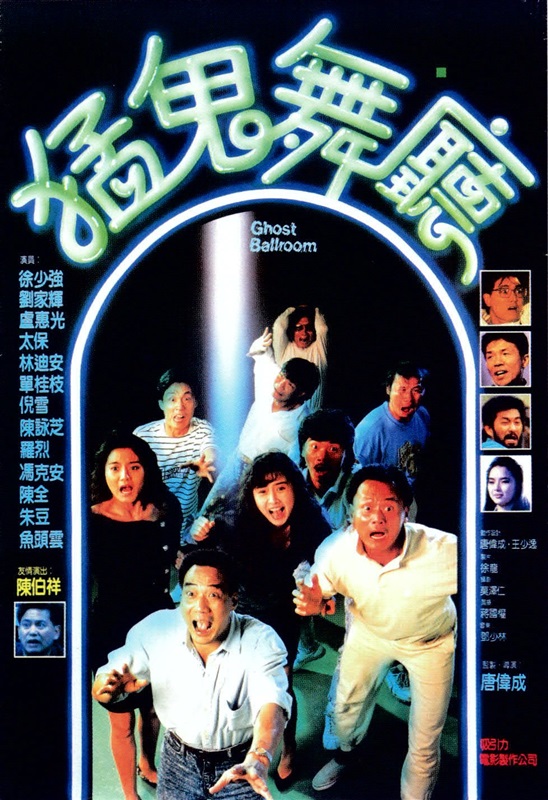 Well, since it's quite possible nobody else will ever write a review of this film, I feel somewhat honour bound to do a quick one:

First things first, GHOST BALLROOM is not a good movie. There's really no sense of the words "good movie" that could be accurately applied to the film.

However, not being "good" doesn't mean it isn't quite enjoyable to watch, mostly because it's a good chance to see a bunch of martial arts actors from the 70's looking a little bit older, a little bit less dashing and being very silly much of the time.

The plot is very simple, barely coherent and quite ignored for the majority of the film. A club hostess is murdered by her gangster boyfriend and her ghost comes back for revenge. Her two hostess housemates are much more upset by her return than her death (which didn't seem to bother them much at all), and their boyfriends are kind of freaked too, but when they're not gambling they are persuaded to help the ghost take revenge. That's the "plot" part of what happens anyway, but much of the film is only tangentially connected to it, in that peculiar way that you only seem to get with Hong Kong movies.

Since the fun bits are mostly not those related to the plot it's not a bad thing. Particular highlights of the film include

- Gordon Liu getting attacked by a gang of thugs who accuse him of being "old". He shows them with authority that he is "not old".
- A very drunk Lo Lieh taking the ghost to a hotel room and acting out his fantasies about what they'll do when she gets out of the bathroom.
- What happens when she does get out of the bathroom. At least, part of her does :p
- Norman Tsui improvising in a morgue... one of the most disturbing scenes I've ever seen, that would fit quite nicely in a Takashi Miike movie but is apparently meant to be *comedy*.
- Norman and Gordon fighting director Wilson Tong and his thugs at a noodle stand, and all 3 of them showing that age hasn't dulled their martial arts one bit.
- Fung Hak-On frolicking in a swimming pool with a random naked girl

And there's a few more scenes are pretty enjoyable, but admittedly a bunch that are really not (most of the scenes of Norman gambling for instance).

It's a film that's probably only enjoyable if you're familiar with the cast and want a chance to see them a little bit older and having a good time together, which really seems to have been the primary purpose the film was made for anyway :)