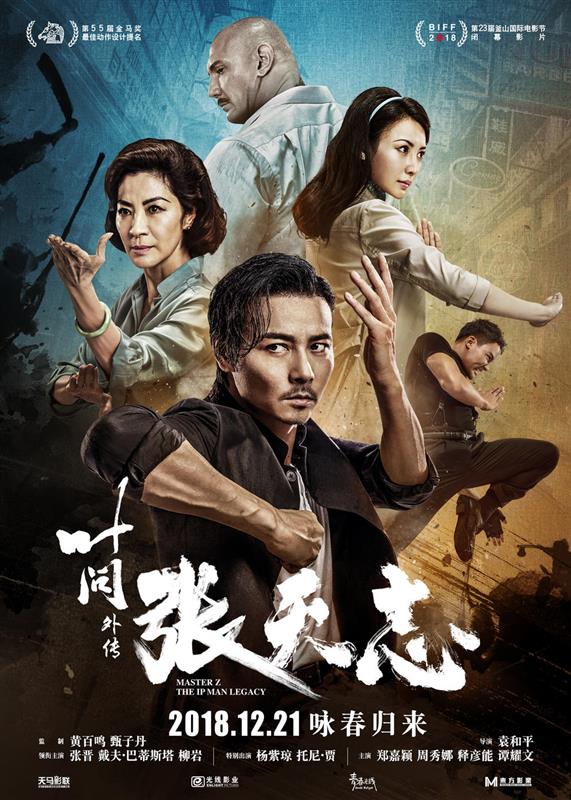 After his defeat by Ip Man, Cheung Tin-Chi (Max Zhang) shuts down his Wing Chun school and retires from the martial arts world, opening up a small shop and living a simple life with his son. After stepping in to protect two women from a gang of triad thugs his simple life is turned upside down, and he is drawn into the murky underworld of Hong Kong in the early 1960's.

MASTER Z - and I honestly have no idea why the film is called that - is an official spin off from the popular Ip Man series ... you can tell because there is a 0.5 second clip of Donnie Yen as IP MAN. Also because it has the same scriptwriters, Edmond Wong and Chan Tai-Li, but with Yuen Wo-Ping taking over as director and his brother Yuen Shun-Yi stepping in to the action directing shoes.

The themes it covers will be familiar to IP MAN viewers, i.e. the dignity and nobility that true martial arts mastery brings (or requires), the importance of Chinese unity and the general untrustworthiness of foreigners all being painted with with some very broad and monochromatic brushstrokes (and I don't specifically mean Michelle Yeoh's calligraphy, lovely as it may be).

It's all good clean fun if you like a film where it's easy to tell who the good guys and the bad guys are and don't mind a bit ... OK a lot... of nationalism, but you can comfortably switch your brain off whilst watching it.

What we're here for is of course the fights, and Yuens Wo-Ping and Shun-Yi are more than happy to deliver, with some really creative choreography that makes liberal use of wirework to deliver some fluid high-impact combat that harks back to the glory days of 90's wire fu, with slightly more modern technology and production values.

When fists aren't flying the film also presents an interesting side of Hong Kong's history that isn't often touched upon by its films, at least directly, with a rather evocative depiction of the hostess bars where local girls suffer the attentions of drunken sailors in an attempt to make ends meet, and the corrupt British authorities turn a blind eye to criminality as long as a cut of the profits is flowing in their direction, regardless of the harm it does to local communities.

It's not deep or subtle and it's still definitely the fights that make the film worth watching, of course. Speaking of which, why the hell is Tony Jaa in this film? This is not a complaint, his presence and his fight scene are very welcome, but his character is introduced early on as if he's going to play an important role and then he ... doesn't.

Michelle Yeoh is of course always welcome on screen, and her role in the film is quite substantial and makes good use of her talents. The film is almost stolen, however, by Dave Bautista - who I assume is a famous wrestler or some such in real life and not actually a steak chef (an ironic role given he has the physique of a bull). He delivers one of the more nuanced performances in the film ... which is admittedly a very low bar.

I am aware I haven't mentioned the film's leading man... Max Zhang has some moves for sure, but he's no Jet Li in the charisma department. And MASTER Z is no Fist Of Legend, to be sure, but it's a pleasant enough holler back to those glory days - albeit not one we're likely to still be using as a reference point in 25 years.