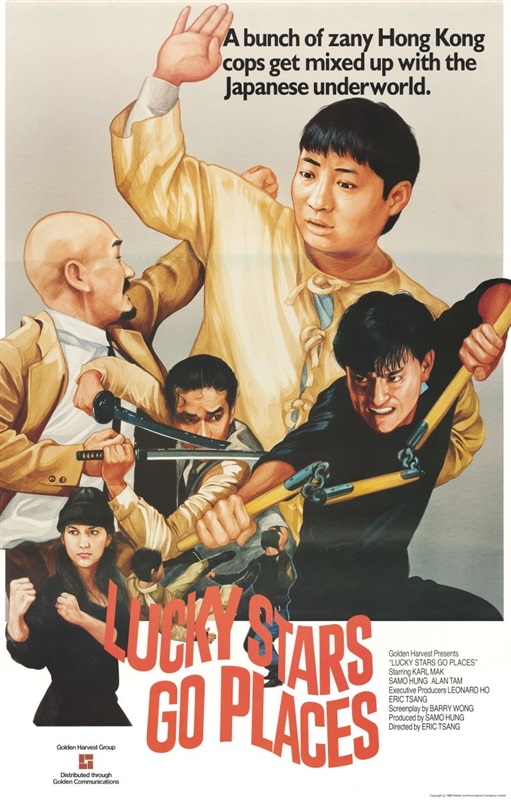 This film was intended to capitalise on the success of both the LUCKY STARS series of films and the Aces Go Places series, though in practise the connection to each is tangential. The original lucky stars appear for only one scene, lasting 5 or 10 minutes, in which thankfully nobody gets groped. Sammo has been recruited by the police for another 'off the books' mission, and his old team refuse to do it. He therefore has to recruit a new set of Lucky Stars, who include Andy Lau as the hard boiled kung fu super-cop, Alan Tam as a cop with the ability to speak to dogs and a great sense of smell (don't ask me why), and a couple of other odd-balls. They go to a remote cottage for 3 days of intense training, all of which they spend... ho ho ho... plotting to grope or rape the female instructor. Sigh :-(

But this section is thankfully much shorter than in TWINKLE TWINKLE, though at least as offensive. After it's over they go on their mission to steal some diamonds from the fortress of some Japanese mafia types. Why they were sent along I don't know, as the whole operation would have been infinitely smoother if they'd just sent Andy Lau & the female instructor. After some 'comedy' we get a reasonable set of action scenes where first Andy Lau and later Sammo take on the main villain, an actor I didn't recognise, who has some great moves (good kicker).

The connection with ACES GO PLACES is even more tenuous - Karl Maka reprises his role of Baldy in a couple of scenes, utterly unrelated to the main plot but featuring some amusing bickering with Sammo. These are the funnier moments of the film. Also, having Eric Tsang in the directors chair is a kind of bridge between both series.

Overall, this film shifts the focus more towards the action from the comedy again, which is a good thing, but they could still have made a much better film by dropping the grope & rape "gags" altogether and making a decent little action film with Sammo, Andy Lau and Lady trainer (I don't know the actress) taking on the criminals themselves, and actually tying the Karl Maka / Sylvia Chang scenes into the rest of the plot. More of the film is worth watching than with MY or TWINKLE TWINKLE, especially the final fight where the villain and Andy Lau both kick some decent ass, and Andy's first scene with a similar action quotient. I presume he was doubled by one of the Chin brothers (Siu Ho or Kar Lok) for the more impressive moves, but he still looked good. It's funny to think now that he was originally being pushed as a martial arts star.

Nothing about the film is unforgettable, but the action scenes are worth catching if you fancy a bit of eighties HK choreography from Sammo Hung :-)