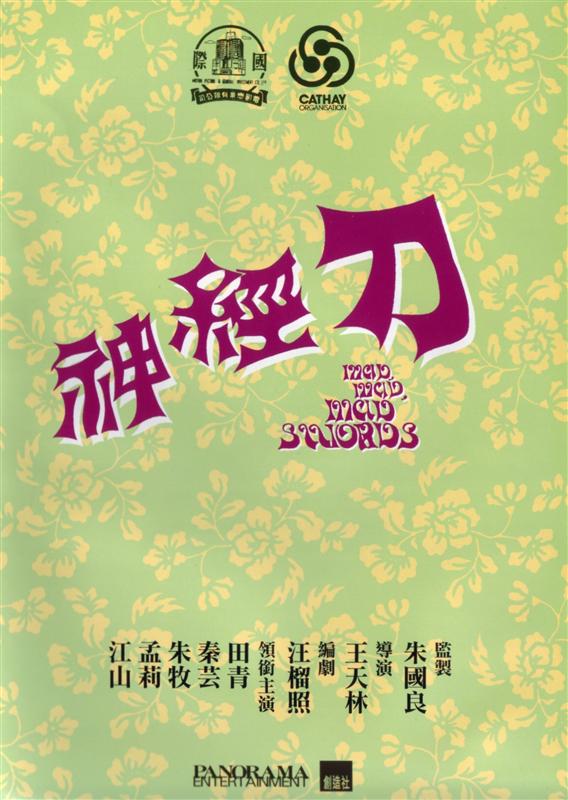 In the 50's and 60's there was no doubt that Shaw Brothers ruled Hong Kong Cinema, and the only real competition they had was from Cathay Studio. When Celestial started releasing the remastered Shaws titles, Panorama evidently recognised a good idea and started their own line of Cathay releases. They've released far less titles in the past 12 months though, and mostly focussed on dramas and musicals, so I haven't picked any up... until they released the first swordplay film, MAD MAD MAD SWORD directed by Wong Tin-Lam - once a prolific and high profile director, but best known to modern audiences as the fat guy in Johnnie To's The Mission and the father of Wong Jing.

MAD MAD MAD SWORD is the first example I'm aware of of the "Martial Arts Comedy" genre, and is a gentle spoof of the swordplay movies that dominated Hong Kong cinema at the time. The comedy is a far cry from the Cantonese comedy that his son would make his dubious own some decades later - it's quite a subtle comedy, if not quite "refined".

The hero of MAD MAD MAD SWORD is basically a coward, who becomes the head of a martial arts clan largely because he ran away from the big fight that killed his master and wounded most of the more likely successors to the title. Along with the leadership comes a command to marry the master's daughter, who is a mighty fine young lady and quite worth marrying. However, she is not terribly enamoured with the guy, and says that in order for the marriage to go ahead he must rebuild the name of the clan, and show himself to be a swordsman of note. Thus begins the hero's adventures. Not being a terribly skilled swordsman, he comes up with a number of amusing tricks and schemes to best his foes.

The film is definitely a comedy, and definitely a spoof - the character is a far cry from the righteous heroes of the Chang Cheh and King Hu films, but he's not a bad guy and you still want him to do well. The other members of the jiang hu are far more like the straight-laced swordsmen that are typically lead characters, and the film makes more fun of them. An early scene has the hero defeat a character clearly modelled on blind swordsman Zatoichi by sneaking up and fastening a set of firecrackers to his coat tails, causing him to swirl and lash out at unseen (and non-existant attackers) until he becomes dizzy and falls over... at which point the hero calmly walks up and claims victory. He's a kind of everyman hero that the audience can more readily see themselves becoming than a Golden Swallow, I guess.

Despite being a "spoof", the film also works quite well as a swordplay film - the comedy doesn't clash with the genre as it does in something like Samurai Fiction, but rather adds to it. Ignoring the comedy, it's still a very well made swordplay film. The acting is superb, costumes, sets and cinematography typically lucious and the action scenes... well, passable. In other words, it's a very entertaining film and one that fans of the swordplay genre should definitely pick up.

Although Panorama's DVD is described as "Digitally Remastered" (pretty hard to make a DVD from a non-digital master I'd have thought), they're not doing anything like the kind of restoration that Celestial are doing for the Shaw Brothers titles. Watching it makes it clear just how good a job Celestial are doing, as the quality is much lower. Colours are muted, there's quite a bit of noise and damage on the print and the brightness/saturation are a little unstable, flickering slightly between frames. Most significantly, the DVD is presented at a 4:3 aspect ratio - and this clearly wasn't how it was filmed. In some places, cropping is quite evident, but more often it seems that the picture has been horizontally squeezed, making people seem rather tall and thin. Why they would do this I have no idea, but it's quite likely that the disc is made from a video master made some time ago, probably for broadcast... and people did that sort of thing in those days. I was thankful for my Malata's XY scaling features, and stretched the picture out to something like a 14:9 aspect ratio, which seemed to work - more or less, most of the time (the amount of squash vs. crop is not constant). Definitely a substantial gripe, but I think the disc is worth purchasing anyway. On the bright side, the audio and subtitles are excellent.

Added bonus - Sammo Hung appears in the film in a very small role, as one of a gang of bandits. He doesn't look much different here than he would in many of the films he made 10 years later - in fact, due to some stubble (probably fake), he actually looks a bit older - I thought it might be his dad at first!