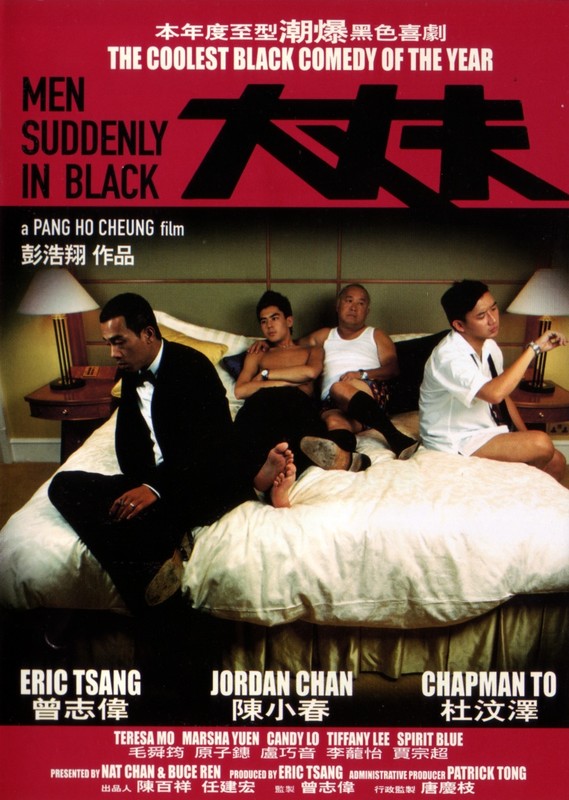 I arrived in Hong Kong on September 11th having heard absolutely nothing about the film MEN SUDDENLY IN BLACK before, but the posters for the film were all around and I was drawn to it - though not especially eager to see it. However, when my girlfriend and I turned up at the cinema in the evening it happened to be playing soonest, so we went in to see it, and were glad we did.

Edmond Pang Ho-Cheung’s previous film You Shoot, I Shoot has drawn quite a bit of positive word of mouth amongst Western fans, but apparently didn’t do well at home as it never got a DVD release, and the VCD quickly went OOP – I have still not seen the film myself as a result. Perhaps the apparent box-office success of MSIB will prompt a DVD release from somebody after all – I hope so, as I’m keen to watch it now.

I’ve no idea what significance the “suddenly in black” of the title has, but I presume it’s a cultural reference with which I’m not familiar. I spent much of the film expecting the 4 lead actors to find themselves suddenly bereaved, but this is not the case. The film is directed in the style of a crime caper movie, though in this case the crime is not a legal one, but perhaps a moral one. Essentially, the wives of 4 men take a trip to Thailand, and whilst they are away the men decide to take the rare opportunity to seek out some extramarital sex. Eric Tsang is the veteran leading the mission, and the film follows their various exploits in the pursuit of adultery.

Clearly this concept is in rather bad taste, but it’s executed in a very stylish and witty manner that kept the audience laughing without thinking too much about the implications… until the film shifts focus to the wives at one point, where the men’s actions suddenly started to seem less comical and more like a real crime. For me this section was a little uncomfortable, but it seemed that most of the audience were able to continue laughing. Perhaps I would have thought less of it if I hadn’t been there with my girlfriend :p

MEN SUDDENLY IN BLACK reminded me quite a bit of another surprise hit from the past year, GOLDEN CHICKEN (also starring Eric Tsang, but there’s hardly been a film made in Hong Kong in the past 12 months that he hasn’t cropped up in). Firstly, the film has a very local flavor – it’s clearly aimed at Hong Kong audiences, which is refreshing at a time when so many HK films seem to be compromised by a desire to appear to international audiences. The locations, the cultural references and the many cameo appearances throughout the film all make it very much a “Hong Kong Film”, which is possibly one reason it has done good business in theatres. This is also likely to make it popular with HK Cinema fans tired of seeing the very things that drew them to Hong Kong Cinema in the first place sacrificed, in an attempt to appeal to Western audiences that has thus far failed drastically. It’s the kind of film that the fans want to see coming out of Hong Kong more often, but obviously it’s never likely to see a wide scale release in the US.

Simply including lots of cultural references would not be enough to make a great film, of course, but thankfully MEN SUDDENLY IN BLACK also benefits from a good script, predominantly good acting, and an intelligent and slick directorial style with excellent cinematography. It’s clearly not a high budget production, but it shows a high level of proficiency in the making that marks Pang Ho-Cheung as a very promising new director in Hong Kong cinema.

Eric Tsang seems to have come into his own as an actor as he’s matured, and is no longer just the comic relief. It’s his assured performance that is the backbone of the film, though Tony Leung Ka-Fai upstages him in a fairly large side-role, giving one of his best performances since Jiang Hu: The Triad Zone. It seems like only yesterday that Jordan Chan was a hot newcomer, but now he seems to be a veritable veteran, if not quite in the same league as Eric or Tony yet. He has such a unique face and demeanor that any character he plays will undoubtedly come across as being mostly Jordan Chan, but he gives his role plenty of nuance and depth in the film.

Chapman To is another actor that seems to be in practically every Hong Kong film released recently, though this is the first time I’ve really noticed him (I’m a bit behind on this year’s releases but I’m sure I’ll either get to love or hate him before too long). I thought he played his character well, and wasn’t annoying as some people seem to find him, but I’d guess he is limited to playing characters that are pretty close to his own.

The other male lead was somebody I’ve never heard of before, Gu Zong-Chao. I’m not sure what the motive was behind casting him, as he seemed much too young and inexperienced next to the rest of the cast – this appears to be his first movie, and quite possibly the first time he’s ever tried to act as he showed absolutely no skill in the art. He was a veritable charisma void, and also suffered from a thick mainland accent and a dreadful haircut… I can only think that he is a popstar or somebody designed to pull in the teenagers, as I can’t think of any other good reason for him being allowed to appear in the film. He’s definitely a weak link, but not disastrously so.

The female cast members don’t get all that much screen time, but Theresa Mo makes a very strong impression as Eric Tsang’s wife. I don’t know how long it is since I saw her in a film, but I couldn’t believe how old she has gotten in between. Like Eric, she seems to have matured with age though, and gives a very strong performance. Candy Lo is fairly charismatic, though not a strong actress, but the other two wives are pretty disappointing. Tiffany Lee’s performance is fairly bland and adds little to the film, and Marsha Yuen seems far too weak and limp, and I keep struggling to remember that it was her in the film at all. Cheng Pei-Pei’s daughter still has a long way to go if she’s ever to have the success of her mother!

In conclusion, MEN SUDDENLY IN BLACK is a fresh and unique film that is sure to entertain fans of Hong Kong cinema, though unlikely to convert anybody that is not already familiar with the territory’s cinematic history. 2003 has not been a good year for HK film at all, and it is refreshing to see that there is still a pool of talent out there that can make a great film given the chance – and that characters such as Pang Ho-Cheung are still being added to that pool. Whilst it may not be a classic that will stand in the pantheon of great Hong Kong movies, it’s sure to be one of the strongest films from this particular year.