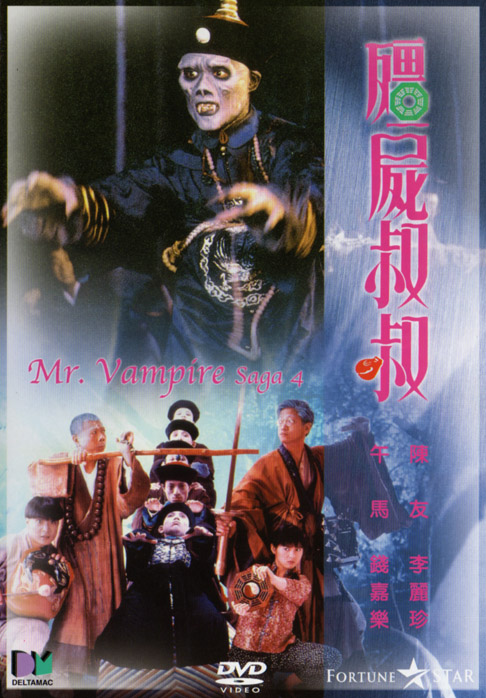 Another Mr. Vampire film, with Lam Ching-Ying absent here and some other chap filling his shoes. He's no LCY, but he's OK. Wu Ma makes up for Lam's absence a little, playing the buddhist living opposite the Taoist, with whom there is a long running rivalry and bickering. Chin Kar-Lok takes over from his brother as the Taoist's assisant, and Loletta Lee plays Wu Ma's assistant. Yuen Wah makes an appearance as a gay vampire (!), which is rather bizarre. The film appears to have confused vampires with dogs in some places. At least I don't remember vampires running around sniffing each other's butts in the first part.

Much of the film is taken up with Wu Ma and Anthony Chan's rivalry as the Buddhist and Taoist priests, constantly fighting though with obvious affection they won't express. Meanwhile, Chin Kar-Lok takes a shine to Loletta Lee and embarasses himself trying to woo her. Then the vampires turn up, and it's fight time. There's less Taoist magic going on here, and more plain fighting with rock hard vampires. The action is good fun, with lots of scenery being destroyed in the combat. Quite well choreographed. Chin Kar-Lok seems to suffer a lot in the making of the film, constantly being hurled at or through furniture and walls :-)

It's an enjoyable film, though not as tight as the first part. I wasn't sure when it was made, so I tried guessing whilst I watched... I guessed about 1992, when it was actually 1988... I guess that's a good accolade.