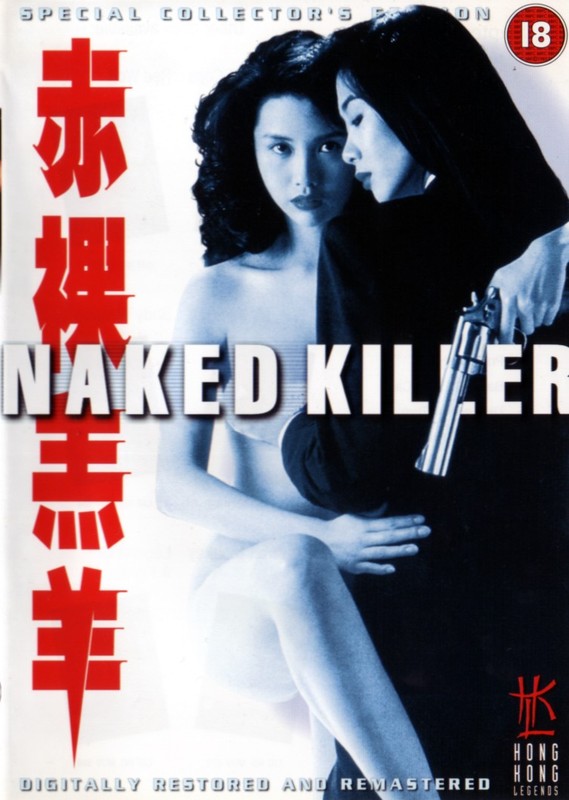 I can't decide whether to call Naked Killer "silly" or "stupid". "Silly" seems a little too kind, implying a certain deliberateness that I don't feel was there... but "stupid" seems a bit harsh since I did enjoy watching it. The plot is Wong Jing at his finest, probably written on the back of an envelope when drunk (and horny). Chingmy Yau's dad is killed by her stepmother's lover, so she goes on a bullet-flying revenge kick. She's rescued from the shootout by an older woman, who decides Chingmy would make a great female assassin. The plot is kept moving by poor confused cop Simon Yam and deliciously evil lesbian hitwoman Carrie Ng.

OK, it's definitely "stupid", I admit. Devoid of all subtlety and almost all sense, casual rape humour and bigoted concepts of homosexuality - all the things that Wong Jing is famous for are in abundant display here. This is coupled with the fact that Chingmy as Sharon Stone/Nikita fails to act at all convincingly, and even the normally enjoyable Simon Yam is pretty lousy in this particular role. And the few action scenes are terribly edited, to try and minimise the glaring obviousness of the stunt doubles being used for the girls...

... so much about the movie is wrong wrong wrong, and yet it remains enjoyable. Partly because it is so stupid. Partly because Carrie Ng is wonderful as Princess, but mostly just due to the art direction & cinematography I think. The sets and costumes are all very colourful and unusual, and the lighting decidedly dream-like, as is the camera work. It creates a very decadent mood for the movie, in which all this stupidity and exploitation is allowed to flourish.

The movie definitely doesn't deserve the 'classic' reputation it has, but it does have quite a few unique and interesting ideas and a very stylish look. It's not Clarence Fok's best movie, but nor is it Wong Jing's worst.

The new DVD from Hong Kong Legends is excellent as always. I thought I'd seen the uncut version of the movie before, but there seemed to be a little more sex & violence than I remembered, so maybe not. I'm fairly sure this version is the uncut version. Not that there's anything too explicit on display still, but it takes things a little further than the average thriller in cheap thrills at least.

Not an essential purchase, but not one to avoid either.