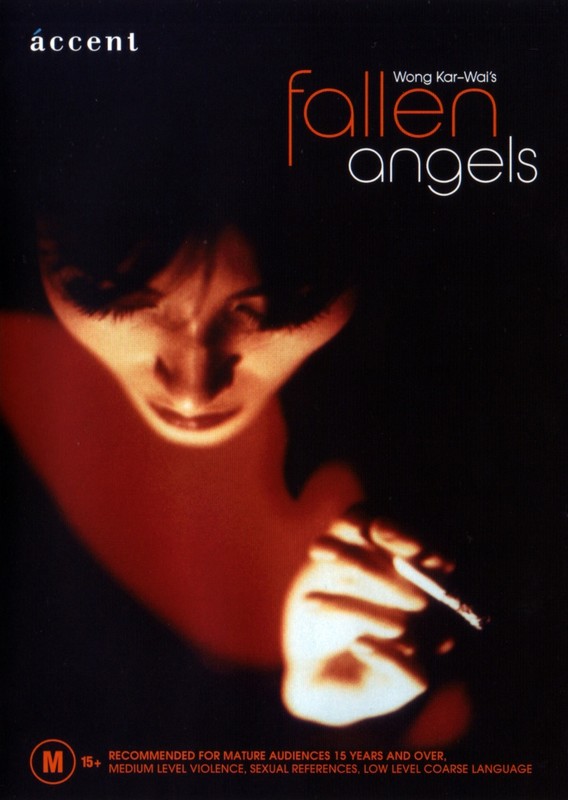 Being quite a cinema neophyte before HK film caught my eye, it's fair to say I'd never seen anything remotely like FALLEN ANGELS before. A decade later and a few more films under my belt, it's fair to stay I've still seen very few films like FALLEN ANGELS, and most of those were either by Wong Kar-Wai or clearly influenced by him. With the double-whammy of Chungking Express and sister-film FALLEN ANGELS, Wong could quite convincingly be said to have invented a new form of cinema. And that's pretty cool, when you think about it.

I don't really know much about Wong Kar-Wai's history, where he learnt his trade etc (I know that he was mentored by Patrick Tam in his early days, and served time as a script writer on films that didn't give the slightest clue what he'd be like as a director (the dire Rosa and the great but completely different Saviour Of The Soul for instance). His debut film, AS TEARS GO BY, didn't give that much of a clue how radically he would alter the cinematic landscape of Hong Kong either, though it was notable for being technically sophisticated and somewhat more philosophical than the average HK gangster film. His second film, Days of Being Wild, showed major leaps forward in his style, and his epic wu xia pian Ashes Of Time confirmed that something very different and very special was happening in Hong Kong. The troubled production almost broke the bank and was greeted with confusion and indifference by the Hong Kong audience when it was released. It was certainly not what people were expecting, and nobody quite knew what to make of it. Though it's widely recognised as a classic outside Hong Kong, the cost of the production was in no way matched by box office returns, and it probably came very close to ending Wong Kar-Wai's career. Luckily, sometime during the post-production of AOT he had knocked together a little film called CHUNGKING EXPRESS, the debut of super-star singer Faye Wong and an entirely more accessable film full of pop culture and visual energy. This film was a much bigger success, especially overseas, and was enough to guarantee that Wong would get to make more films in future. Phew!

The next film was this film, FALLEN ANGELS, originally intended to be a third story woven into CHUNGKING EXPRESS but probably judged to be too different in tone to be integrated into it. Evidently another story came from somewhere and FALLEN ANGELS also features two intertwined tales, but even though it touches on similar themes it's a much darker experience. Comparing The Mamas & Papas CALIFORNIA DREAMING from CE and Laurie Anderson's SPEAK MY LANGUAGE in FA is a good illustration of the difference between the films. CHUNGKING features lonely characters struggling to make connections in a modern urban society, and it's got a bit of sadness but ultimately puts on a brave face and finds itself in the chaos of its surroundings. FALLEN ANGELS features similar characters in similar circumstances, but acknowledges that some people are going to stay lost. It's interesting to note that Wong's films have generally been more popular outside Hong Kong than with the local audiences, despite the fact that his films feature a special awareness and honesty about Hong Kong itself. CE and FA show many sides of Hong Kong at night, featuring images that capture the feel of the city and its people in a way that somebody who hasn't spent time there can't possibly appreciate. The city is almost one of the characters, maybe even the main character in some respects - somehow the films achieve a universal appeal anyway. Not to say that everyone in the world loves FALLEN ANGELS - it's his most divisive film after ASHES OF TIME, dividing even people who consider themselves WKW fans into love/hate camps who are eternally baffled as to why the other group loves or hates it.

I'm definitely in the "Loves It" camp, but I'd have a hard time trying to explain to a "Hate It" why that is. The easiest thing to grab onto is the visuals... Wong and maverick DP Christopher Doyle try every trick in the book (and some that are only in the book because they scribbled them on beermats and used them as bookmarks) to create some of the most memorable images ever put on screen. Different film stocks and lenses are brought into service almost shot to shot, and cameras are placed in locations that would probably get you kicked out of cinematography school. Colours are mostly over-saturated and lights are bloomed to create a sense of hyper-realism that has provoked comparisons with MTV music videos. The mise-en-scene is very modernist, using wide angles and depths of field to detach the characters from their environment (symbolising their alienation). If they can film somebody in reflection they rarely miss the chance to do so. Its probably this overdose of style that puts off most of those that dislike the film, as it's hard not to feel that you're watching a director playing with his toys rather than making a film for the audience's benefit. I would assert that there is almost always method to the madness though, and though Wong and Doyle were certainly having fun experimenting, it was all for the purpose of crafting a visual language that matched the themes of the film. Special mention should be made of the soundtrack, an eclectic mix of styles that are very well chosen as the foil for the visuals.

The other objection I imagine people have is that there's no story, which is fair. Well, there is a story in the sense that things happen to people in chronological order, and even that the characters follow some sort of narrative arc in the course of the film (pretty short arcs, admittedly). It's not really a story-driven film though, it's thematically driven and character-centric. The major theme of the film is summed up twice by Takeshi Kaneshiro, who notes that we pass by all sorts of people every day, and we never know which of those people might become our friends or lovers. Sometimes we think we've met the person who'll fill one of those roles, but statistics would suggest we're more likely to be wrong than right. The implication of this observation is that people are generally lonely and fed up most of the time, especially in today's fast-paced world where we might pass that person that's meant to be our closest friend on the street and never see them again. Again I assert that even if there's no story, it doesn't mean there's no purpose to the film, and the thing that's most likely to make a person love FALLEN ANGELS, even more than the visual opulence, is the way Wong captures these themes in the mini-stories of his characters. "Nobody ever made loneliness so sexy", I'm sure somebody said after watching this film.

Speaking of sexy, I'm sure nobody has watched FALLEN ANGELS and failed to notice Michelle Reis being extremely sexy - even obscenely so in a couple of scenes, it could be said. This reminds me of another of Wong Kar-Wai's great strengths, which is his ability to get career-defining performances out of his actors. For Michelle Reis he does this by casting her *extremely* out of type. The young actress was mostly known for flower-vase roles, typically playing a wide eyed innocent and typically the kind of "good girl" you'd take home to meet your mother. FALLEN ANGELS changes all that radically, casting her as the kind of sex-bomb bad-girl you'd sell your mother to take home. I'm not sure how Wong got her to look, dress or act how she does here, but thank the gods he did, because the world would be a lesser place if it had never happened :p

Another case of slightly perverse casting was the decision to cast polyglot Takeshi Kaneshiro as a mute. Although we get to hear his thoughts through the magic of voice-over, he is left to express himself on-camera in a more physical manner, which turns out to have been a genious decision as it brought out a wonderful performance from him. His character is quirky - well, mad really - but exceptionally charming in TK's hands, and his performance is probably the highlight of the film. Charlie Young and Karen Mok both get to be wacky too, but more verbally and less memorably.

That just leaves Leon Lai's performance to comment on, and I guess the fairest thing to say is that Wong knew how to use his lead actor well. Based on this film you'd be forgiven for thinking that Leon Lai was a great actor and a very cool dude indeed, but you don't have to see many films with him in to realise that he's actually a wooden actor and seems like rather a boring guy. The trick to getting a good performance out of him then is to not require him to express any emotion. Or to speak, if possible. If you look closely in FALLEN ANGELS you'll notice that most of the acting is actually done by Leon's hair cut :p Still, it works :) 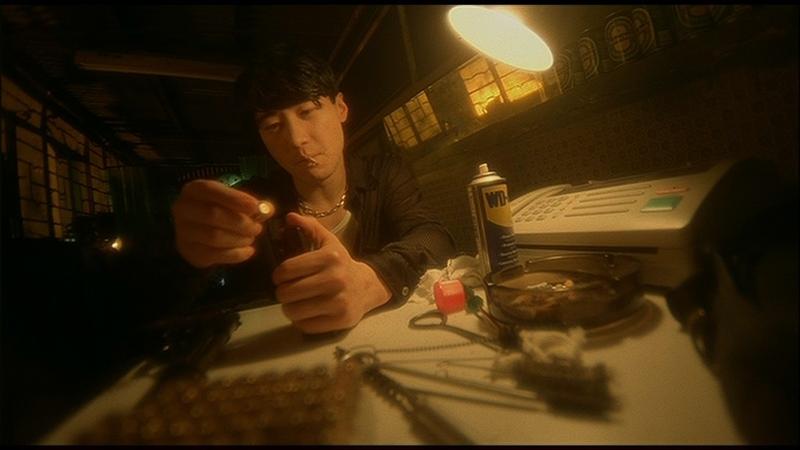 So, what have we got at the end of all that? Basically it's a visually stunning film that captures the feel of living in Hong Kong, and the more universal themes of alienation and loneliness, and the difficulty developing personal relationships in a big city. With a fantastic soundtrack. You're either going to like it or not, and that's really up to you, so I've nothing more to say on the subject!