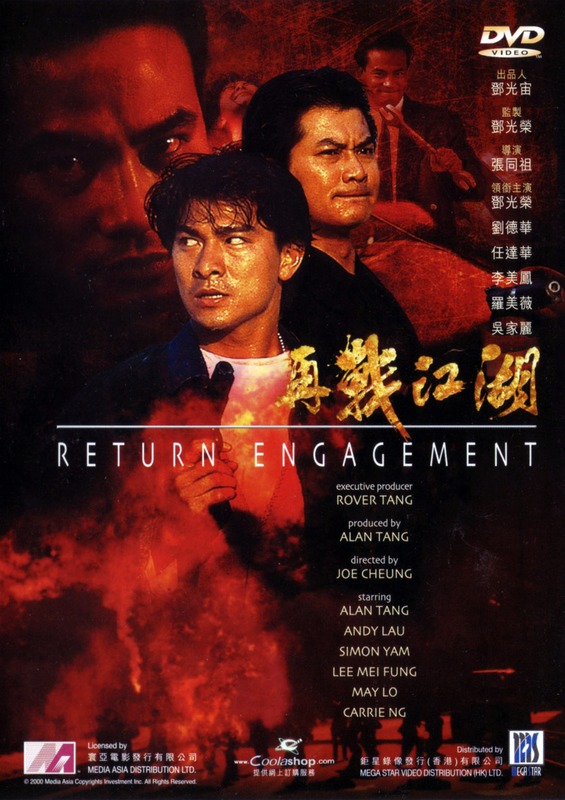 Triad dai lo Alan Tang spends 15 years in a Canadian prison after revenge killing a mafia boss. When he gets out, he goes to Hong Kong to look for his daughter. He hooks up with a teenage girl that ran away from the same orphanage as his daughter, and the bar hostess that looks after her, and bonds with them in the search. This all leads (rather indirectly) up in an bullet ridden finale of insane proportions as insurgency in the HK Triad ranks put him in conflict with a deliciously bad Simon Yam.

I don't know why Universe chose a trio of Alan Tang movies to be their first anamorphic oldies - I'd never heard of him previously. I have to admit to having a soft spot for him (probably thanks to Black Panther Warriors). His suave but tough persona is totally unconvincing but quite endearing.

I can't really claim that Return Engagement is a "good movie", but I did enjoy it quite a lot. The basic plot of man out of prison and teenage girl on the wrong side of the tracks searching for a daughter has been done before, I'm pretty sure, and I can't say that the script offers any particularly profound or subtle insights into the set up. It does offer an absolute ton of melodrama though, and sometimes that's what you need.

Alan Tang's inexplicable charm and a storming performance from Elizabeth Lee carry about 75 of the 110 minute length (Andy Lau, despite second billing, has about 15 minutes screen time tops), and it's quite an engaging story with enough interesting and unexpected moments not to get boring at all. The movie could probably have ended there and been a pleasant but forgettable drama. But the final reel, where it goes into Heroic Bloodshed territory for no particular reason other than that it's what movies about gangsters do, elevates it out of the pack and shines a little spotlight on it. The bullet count and body count is crazy, as the revenge cycle escalates wildly and Andy's small band of Canadian triads take on an army of black suited goons with machine guns. Really OTT, and a lot of fun. Rather than rolling the credits when the last bullet falls, there's also quite a touching epilogue to tie things up.

Not a movie to get all excited about seeing, because you'll probably be disappointed, but certainly one you should have in your collection for when you're bored and in need of a melodrama and heroic bloodshed fix.