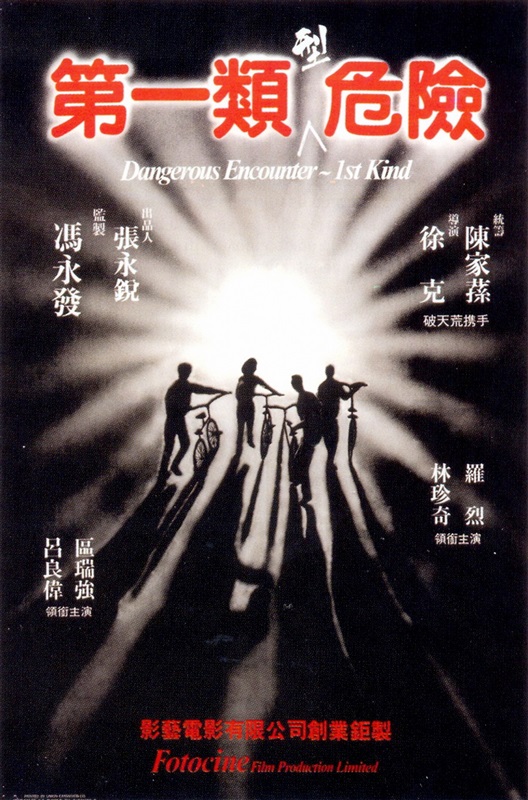 A group of teenagers figure out how to make a bomb and set one off in a movie theatre - for no particular reason except they can. Nobody is hurt, but a girl spots them placing it and tells them she wants to be part of their gang or she'll turn them in.

Spurred on by each other, the youths escalate their anti-social activities until they have bitten off more than they can chew.

Tsui Hark's third film as director is somewhat legendary, as Hong Kong censors disapproved of its portrayal of anarchistic youths and ordered it to be substantially cut, eventually being released in redacted form as DON'T PLAY WITH FIRE. Even this version was hard to get hold of for a long time, adding to it's legendary status, but it was eventually released on DVD.

Some enterprising souls somehow managed to get hold of a VHS copy of the uncut version, and have spliced in the missing scenes to recreate the "Director's Cut". It can be found on YouTube.

The film is a nihilistic portrayal of youth gone wild in an environment of societal collapse, and I can see why the censors might have been uncomfortable with it. Most of the redacted scenes are to do with making and planting bombs (a fairly significant part of the plot), which suggests that they were most worried about potential copy cats.

The film doesn't seem quite so radical 40 years on, and in fact compared to some Japanese films from the 60's and 70's like Go, Go Second Time Virgin, it wasn't really that radical even back then. It would even fit in quite well with Shaw Brothers shockers like Killer Snakes, or American fare like DIRTY HARRY.

The film's bleak tone, sometimes gruesome violence and stylish cinematography did mark its director as an interesting up and comer though, even after its trouble with the censors. It seems to have been impressive enough to convince the nascent Cinema City to bring him on board, and from there history was made.

Probably the most impressive part of the film is Lin Chen-Chi's fierce and intense performance, a radical departure from the wu xia damsels she typically played in Shaw Brothers films. It wouldn't be half the film it is without her.