Directed by
8/10 - It's about demand and supply 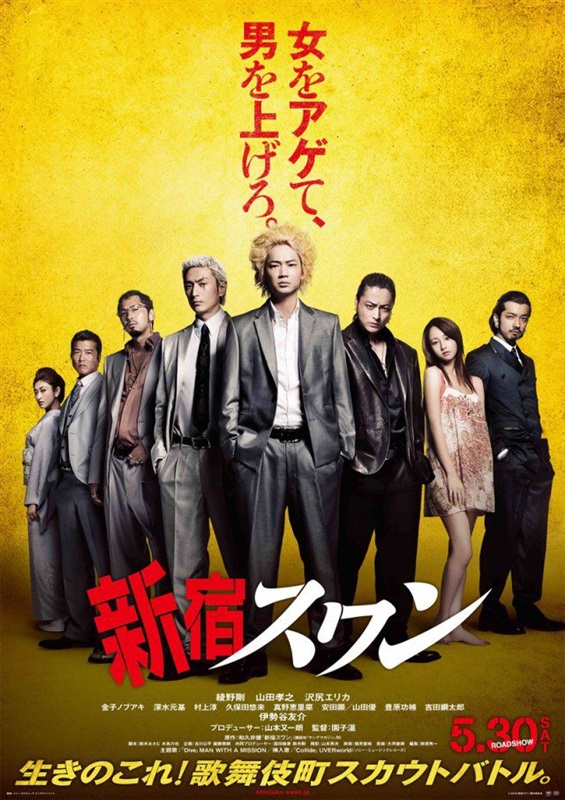 Tatsuhiko arrives in Shinjuku with nothing but the change in his pocket and the ambition to make something of himself in the city of lights. After seeing him bravely take on a gang when hopelessly outnumbered, a stylish guy called Mako takes him under his protection and offers to train him to work as a scout.

A scout's job is to walk the streets of Kabukicho approaching attractive women and trying to convince them to work in one of the hostess bars or massage parlours affiliated with the group. In return the scout gets a finder's fee and a percentage of her earnings for as long as she works there.

Tatsuhiko is strong and brave but naive and kind of dumb. He has some qualms about taking girls to work in the sex trade, but Mako points out to him that many girls do so willingly and happily - that's why they came to Kabukicho. It's about demand and supply - everybody wants something and has a price they're willing to pay to get it.

Tatsuhiko is satisfied with this perspective and resolves that every girl he finds work for will be happy.

After a while he begins to realise that the sex trade isn't all smiles and fun times (who knew?), and when conflict breaks out between two rival groups that want to monopolise the Kabukicho scouting business he realises how ruthless the industry can be.

First things first, Shinjuku Swan claims to be set in Kabukicho but is clearly actually set in Kamurocho, the setting for the Yakuza series of video games. I've spent a lot of time there and would recognise it anywhere! They've done a great job of replicating the game's environment in real life though, my compliments to the set designers - it almost looks like a real place.

Shinjuku Swan's plot could easily have been the story line for one of the Yakuza games, though it is actually based on a manga (with which it shares a name). I think it's fair to assume that the games were an influence though, and there are what I took to be a couple of nods to the games in the film. The city's streets and hostess bars will feel very familiar to players familiar with the name Kazama Kiryu.

I think the film provides a fairly even handed view of the red light district, with many girls genuinely being happy with the lifestyle their job affords them, but with exploitation and widespread drug usage causing serious suffering for others. Tatsuhiko meets one such girl, played by Erika Sawajiri (Helter Skelter) in another role that must have come quite naturally to her and kind of foreshadows her own future. Although her role is relatively small she gives another great performance - it's a shame we won't be seeing more of her in future.

Takayuki Yamada is really good in his role as well, making his character feel a lot more 3-dimensional than could have been the case for the role he plays. Nobuaki Kaneko also gives an interesting performance, and I'm happy to see that he's in several more films on my watchlist. Yusuke Iseya is one hell of a cool dude ... or at least plays one very convincingly.

Yu Yamada is a powerful presence, but I'm confused to discover that I don't appear to have seen anything else she has been in, because she looked very familiar. I don't know what the shooting schedules were but I have to say Erina Mano is shockingly chubby here compared to her appearance in The Virgin Psychics, released just a few months later.

Yeah, I'm kind of avoiding talking about the main character, as portrayed by Gou Ayano. He has a tendency to overact and spends far too much of the film pulling funny faces, which is deeply irritating. Sion Sono is usually very good at getting interesting and powerful performances from his cast, so not sure what went wrong there. Maybe it was the hair. His performance is probably the weakest link in the film, though he at least engages in the fight scenes with convincing enthusiasm.

SHINJUKU SWAN is quite conventional by Sion Sono standards - there's nothing particularly outrageous or unpredictable in it, it's quite straightforward and direct. It's a slickly made and stylish film that's entertaining throughout it's 140 minute runtime, and offers some interesting insights into the culture. Fans of the Yakuza games or the movies that inspired them will definitely want to watch it.

Editor's note: yes I am aware that Kamurocho was based on Kabukicho in real life, not the other way around!