Directed by
Genre
But why an eel? 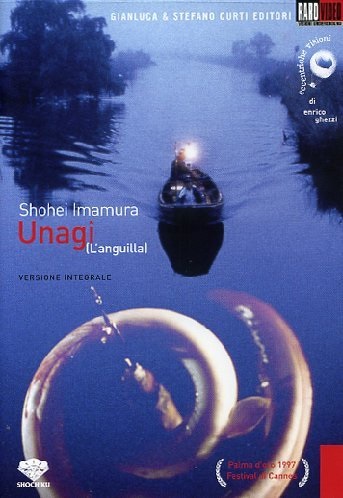 He listens to what I say...
He doesn't say what I don't want to hear.

Yamashita is a salaryman with a beautiful wife whose only vice is his overnight fishing trips. He receives a letter from an anonymous source telling him that whilst he is on those fishing trips his beautiful wife receives nocturnal visits from another man. When he heads home early from his next trip and finds the accusations confirmed, he takes a knife to the cuckolding pair. He then calmly cycles to the police station and very politely turns himself in.

Eight years later he is released on parole, having been a model prisoner. His parole is guaranteed by a Buddhist monk, who helps him to get an abandoned barber shop open again in a quiet rural village. The curious villagers start to utilise his services, but find him to be antisocial and withdrawn - keeping only his pet eel as a confidant. When a woman that resembles his wife arrives in the village he is too absorbed in his own problems to notice that she has traumas of her own.

UNAGI is a languidly paced tale about guilt and redemption, based on a novel by Akira Yoshimura. Koji Yakusho's Yamashita is a repressed character whose one moment of passion costs him dearly. Misa Shimizu's Keiko attempts to conform to an ideal of obedient femininity, which led her into an exploitative relationship. Both have ended up in this quiet backwater from a desire to withdraw from society, and indeed from life.

The villagers are in contrast much freer, living a simple life with few pretensions and without the pressure to conform that modern city life seems to impose on its residents. Their openness and casual amicability slowly starts to crack the walls the two new residents have built around themselves.

I always enjoy films set in rural Japan, such a contrast to the metropolis of Tokyo. Shohei Imamura's UNAGI and Warm Water Under A Red Bridge form a thematic couple, presenting a somewhat idyllic view of rural life which suggests that in his later years Imamura had learnt to value the simple things and wished to share his lesson with the audience.

The other lesson Imamura wants to share with us is about not letting our past define our future, and that a path to redemption exists as long as we're still breathing.

Imamura's message seems particularly relevant at this moment in time when a nasty streak of puritanism seems to have taken hold in the culture - one which holds that a person must forever be judged by their worst moments and that redemption is never an option (so called "Cancel Culture"). UNAGI recognises that people are flawed, make mistakes and bad choices - will sometimes cause us pain - but shows that with compassion and forgiveness people have a chance to learn and grow. Without it there can only be further cycles of suffering and hurt.

The film isn't as sappy and sentimental as I just made it sound, thankfully. Some of the symbolism is a little too obvious, but in general the film is understated - after directing films for 40 years Imamura definitely knew his craft. His experience is reflected in the cinematography, never overtly flashy but always knowing just how a shot should be framed.

Koji Yakusho played similar characters in a string of films in the mid 90's and early 00's, the kind of repressed salaryman with buried trauma is a part he seems perfectly suited to. Misa Shimizu does a great job with her role as well, as do most of the supporting cast (which includes an adorable turn as a 2-bit wannabe Yakuza from Sho Aikawa).

UNAGI isn't the sort of film that's going to dazzle you or blow your socks off, but it's a fine example of the type of contemplative and quirky cinema that Japan does particularly well.