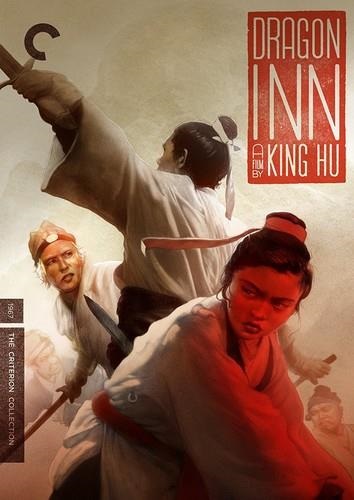 In the Ming Dynasty the corrupt East Agency led by eunuch Pi Shao Tang holds the reins of power, and after patriotic Defense Minister Yu Qian is framed and executed his family are ordered into exile at the remote Dragon Gate outpost.

Mao Zong Xian believes in the principle of "Cut the grass and rip out the roots", and worries that the minister's children will spread sedition, so he sends his second in command Mao Zong Xian to Dragon Gate to quietly get rid of Yu's family.

Arriving before the prison retinue, Mao and his men take up residence in the Dragon Gate Inn, where they are eventually joined by a wandering swordsman named Xiao Shao Zi and a brother and sister duo related to the Yu family. As the children get closer the parties in the inn try to feel out each others' loyalties and capabilities.

DRAGON GATE INN is one of the most famous martial arts films of all time, inspiring several remakes and enumerable imitators. It was itself very difficult to see for a long time, which only served to increase its reputation to near mythical proportions. It was therefore perhaps inevitable that when I finally got to see it I was a little underwhelmed... a fine film to be sure, but it didn't seem all that out of the ordinary.

Knowing how much high expectations can negatively affect a viewing, I didn't feel like I was able to review this film after a first viewing... or a second. After a third viewing I'm still not sure, but I guess I'm as ready as I'll ever be.

My verdict is still that yes, it's a fine film, certainly one of the best in its genre from the era, but it doesn't quite deserve the legendary status it has. It probably would, though, if not for the existence of Come Drink With Me, which came out a year earlier and to my eyes is the better film.

There are some aspects in which DRAGON GATE INN undoubtedly impresses, and it's possible that since I wasn't around back when it was released I can't fully appreciate them. Most notably, the film makes great use of the dramatic Taiwanese landscapes and scenery. In part this is presumably just because King Hu no longer had access to Shaw Brothers facilities, but it does allow him to indulge his knack for capturing beautiful shots of nature.

It's a gorgeous looking film throughout, especially on the beautiful HD restoration that finally made the film widely available. King Hu had a great eye for composition, and since the film was produced independently he didn't have to fit his practises or schedules around the studio and was able to make the film to his own standards.

This extends to the action scenes, which are more numerous and lengthier than those in the previous film, and which develop the director's vision of an action style that represents the slightly superhuman abilities of the heroes in wuxia stories. Although they look dated by modern standards they were no doubt innovative and influential. There are some surprisingly long takes of elaborate sequences involving multiple opponents that must have taken quite a while to set up and shoot.

So why don't I rate it as highly as COME DRINK WITH ME? Partly because it's not quite as tight, running some 20 minutes longer, but it is probably mainly just that it is very similar to the previous film, but without the added credibility of being first.

Or maybe it's just that Cheng Pei-Pei isn't in it - though Polly Shang-Kuan is a pretty worthy substitute, more than pulling her weight in the action scenes and exuding a gravitas that belies the fact she was only 17 when it was released.

I don't want to knock the film too much as it's definitely not a bad film by any measure (the occasional awkward performance permitted, given the era), but its legendary reputation had maybe outgrown the experience a modern viewer can expect when watching it today.