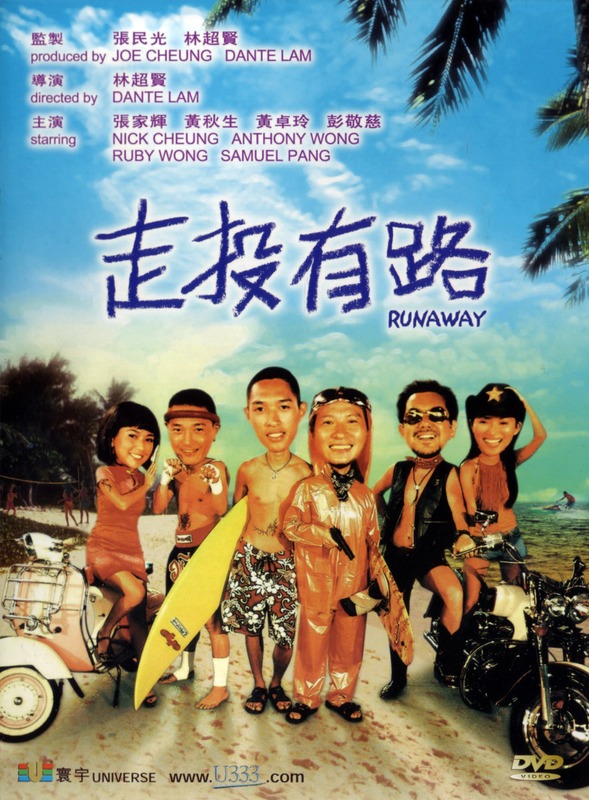 I think a lot of people were disappointed with Dante Lam following up a masterful genre-bender like Jiang Hu: The Triad Zone with a fairly routine cops & robbers flick (Hit Team), but given that JHTTZ was a box office flop, we have to forgive him for making the studios a little bit of money... otherwise they wouldn't give him the cash to splash out on another genre twister like RUNAWAY :-)

RUNAWAY is a strange film - it almost manages to make Jiang Hu look conventional. Nick Cheung and Samuel Pang play two Triad rascals who are forced to go on the run after conning their dai lo out of some money. Passing up the traditional mainland China escape route (because the mainland is boring, they conclude), they take the Deluxe Escape Package to the beaches of Thailand. Once there, they each meet some young ladies they take a liking to and generally have a good time... but word of their location gets back to Brother Kwan, and he sends his men to bring them back.

RUNAWAY leaps about like a very cunning fish (it's a metaphor that works in my head), constantly throwing the unexpected and the downright ridiculous at the viewer. Characters manage to stay so far away from cliche that they're in danger of becoming surreal, but it all kind of works. Anthony Wong gets a much meatier role here than he has for a while and is very good (the first time I've been able to say that of him in quite a long time)... he also gets a scene even more ridiculous and embarrassing than his JIANG HU: TTZ role (but hysterically funny). Other characters are great and well played... but unfortunately the leads don't quite match up to the acting performance. Nick Cheung tries his best, but there are plenty of scenes where it's just too apparent that he hasn't got Tony Leung Ka-Fai's talent, and Ruby Wong is no Sandra Ng either. Samuel Pang doesn't offend me here, though he also doesn't impress too greatly.

With a better cast, RUNAWAY could have been a phenomenon... as it is, it's just a very clever, strange and funny film that again deconstructs the Triad genre and puts it back together in a very strange shape. It had me laughing more than any film has done for quite a while (quite a relief after my depressing weekend viewing!). If you liked JIANG HU: THE TRIAD ZONE, you should definitely see it, but be prepared for the fact that it doesn't hold together quite as well.