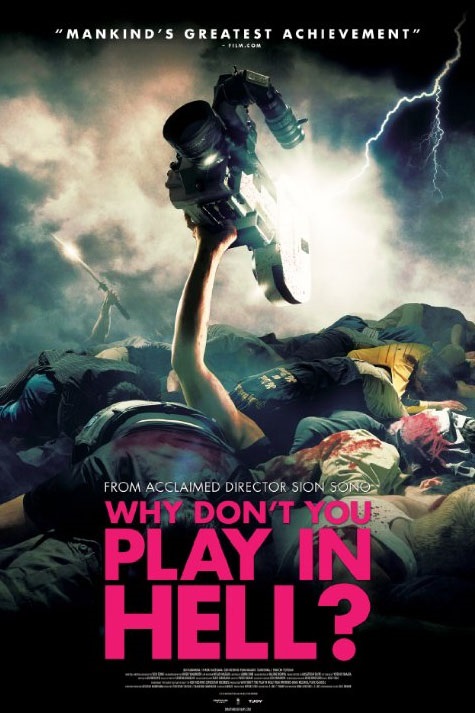 Muto's wife has been in jail for ten years, since she killed a rival Yakuza's men whilst defending their home. She is looking forward to getting out and seeing their daughter, who has grown up to be a beautiful actress... or so she has been told. In fact Mitsuko has grown up stubborn and uncooperative (though undeniably beautiful) and has yet to complete a film, having recently run away from the set, forcing the director to cast another actress in the role.

With just 10 days until Shizue is released, Muto decides to make his own movie to honour his obligations to his wife, casting Mitsuko in the lead role - if his men can find her.

Meanwhile, a group of idealistic young film makers calling themselves the Fuck Bombers are on the verge of breaking up, having yet to complete a single film a decade since they formed...

WHY DON'T YOU PLAY IN HELL? is essentially a love song to the art and craft of film making, a metaphor for the passion, sacrifice and madness that is involved in bringing one's vision to the screen - though it shifts through a series of modes and phases, and encompasses more than that in it's 130 minutes.

It is relatively commercial and was probably made with an international audience in mind, and even though it has an undefinable aura of Sion Sono, it is probably the Sion Sono film that most resembles a Takashi Miike film - featuring the sort of over the top violence, manic invention and surreal moments which made Miike's name in the late 90's and early 2000's.

That's not to suggest that the rest of the runtime is insufficiently engaging or entertaining, far from it - the characters and their stories make for great cinema, and getting to know them is worthwhile in its own right.

The Fuck Bombers idealism and enthusiasm in the face of a continued lack of success is kind of inspiring, even though it is mainly Director Hirata's delusions that have kept them going. Tak Sakaguchi's character Sasaki has tagged along believing in him for all these years but the reality of their situation is starting to sink in, and he realises that he is probably not going to be Japan's Bruce Lee after all (no matter how long he wears that yellow jump suit).

Fumi Nikaido's Mitsuko is the character that ties the film together, starting from her appearance in a toothbrush commercial that opens the film, with her adorable smile and cheerful demeanour inspiring a long-lasting devotion in several other characters. Her relationship with Gen Hoshino's Koji, a random stranger she entangles in her life, gives the film its most poignant moments. She is wild, spontaneous and carefree and he is absolutely none of those things, but they each learn something from their encounter.

Jun Kunimura plays an aging Yakuza boss with the aplomb you would expect from an actor that has basically been playing that role for decades now. Shinichi Tsutsumi is an odd casting choice as his opposite, since he is not often cast as a Yakuza and is more typically an "everyman" sort of character. His incongruity with the role is part of the character he plays here though.

Everybody in the film is more or less insane, with even the disillusioned Sagaki being swept up in the madness and excitement of the shoot again in the end. Hiroki Hasegawa's Director Hirata is the craziest of them all, with his passion for cinema blinding him to even the basic realities of their situation - surely a little self awareness from Director Sono reflected there.

Ultimately we're left with a sense that despite the madness, despite the sacrifice and suffering, the euphoric rush of experiencing the completed product is worth every minute of it.

If it produces films as entertaining as this, it's hard to disagree.