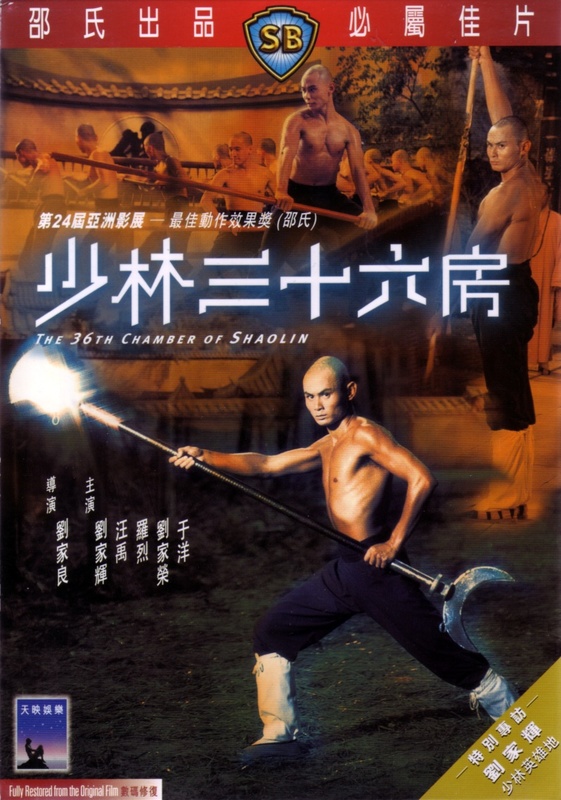 The 36th Chamber Of Shaolin is regarded by many kung fu fans as the finest kung fu film ever made, and few would disagree that it's the best Shaolin film at least. It made star Gordon Liu a firm fan favourite in the West, and was a box office hit in Hong Kong too.

Gordon Liu starts the film as a young Han student who witnesses the oppression of his people at the hands of the Manchus, and develops revolutionary feelings. Seeing that the people are powerless against the Manchu armies, he goes to Shaolin Temple and begs to learn kung fu. His drive and determination leads him to master the various training chambers of Shaolin in record time, teaching him physical skills and wisdom. His wish to free the Han from oppression remains unbroken, however, despite the temple's policy of not getting involved in the outside world's affairs.

The training sequences are the core of the film, as Gordon faces the sometimes tortuous challenges presented in each chamber and learns the necessary skills to overcome them. It's a nice little lesson for the audience in the foundations of kung fu, though necessarily abbreviated for time (the film can't realistically last the full five years of Gordon's training). These scenes are imaginatively conceived and well executed, though it's clear that the superhuman techniques Gordon masters in some of the chambers are rather dependant on wires and other tricks, making them somewhat less impressive than the training sequences in Jackie Chan's Drunken Master, where you can see Jackie is really doing these things.

It wouldn't be a kung fu film if all this training didn't lead to some fights, and the last 30 or 40 minutes of the film is basically one fight after another as Gordon shows off the skills he's developed by kicking a bunch of ass. The fights use various weapons and hand to hand forms and are well filmed by the master Lau Kar-Leung. However innovative and influential Lau Kar-Leung was in the 60's and 70's, his style was starting to look a little dated by 1978 though, as Golden Harvest was developing more fluid and acrobatic styles thanks to the work of the Seven Little Fortunes and others. The film won the "Best Martial Arts" award at the 24th Asian Film Festival, but I'm not really convinced the fights are as enjoyable as some of those that Jackie Chan and Sammo Hung staged that year. Gordon Liu is a fantastic martial artist though, and always a joy to watch.

Verdict: If you're a kung fu fan, the film is an essential purchase. If you're not, this film is probably unlikely to make you one.