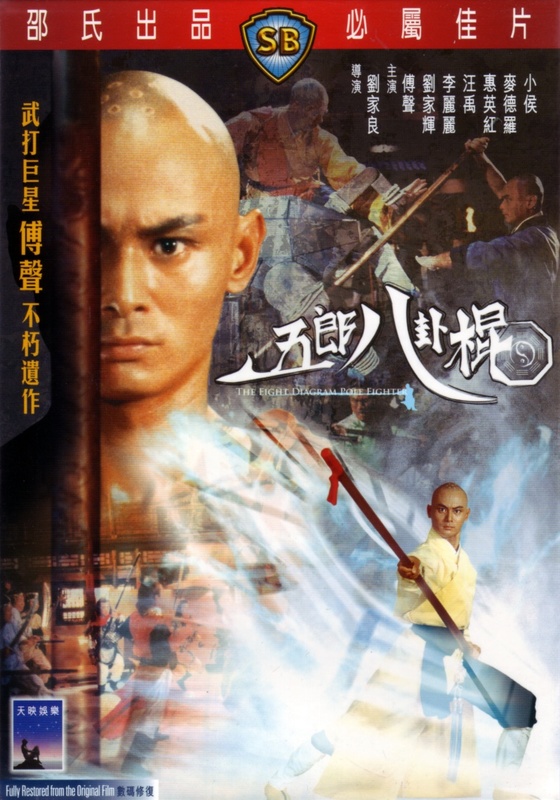 The Yang family are renowned patriots, so when they are called upon to defend the borders from barbarian invaders they go willingly - even when a fortune reading tells them "Seven sons go forth, six return". When it turns out the fortune was not exactly telling the full story the family is thrown into disarray, with the surviving brothers forced into hiding as a traitor seeks to eliminate the family line.

Gordon Liu plays one of the brothers, who seeks refuge in a temple where he seeks to adapt the Yang family's famous spear technique to work with a bladeless pole, to prove to the monks that he can calm his heart and follow the Buddhist precept Thou Shalt Not Kill.

EIGHT DIAGRAM POLE FIGHTER was Fu Sheng's last film, as he died in a car accident part way through production. Those he left behind seem to have been determined to make sure the film was a worthy memorial for the star and pull out all the stops to make it an unforgettable event. It is Lau Kar-Leung's most intense film, dark and imbued with a visceral sense of fury and indignation.

I'm not sure how much was filmed when Fu Sheng died but his role is still substantial and for the most part he appears when you'd expect him to - except he was presumably supposed to be present for the final battle. Gordon Liu and Kara Hui make sure his absence is not to the cost of the audience though.

The film contains some of the most fierce fighting in the Shaw Brothers catalogue, especially in the final scene where Gordon fights Wang Lung-Wei and his sword wielding goons atop a stack of coffins to rescue his sister, who then also joins in the fight once she is freed. Even still they are nearly overcome, until some unexpected reinforcements arrive.

The speed and fluidity of the choreography and the ability and dedication of the cast make this amongst the most impressive fights in Lau Kar-Leung's filmography. There are more wires involved than he was generally known to employ, but they're used to create exaggerated levels of power rather than the kind of fantasy action of the wuxia films that were popular at the time.

EIGHT DIAGRAM POLE FIGHTER marks the end of an era in many ways, Shaw Brothers were in decline with their way of making movies failing to adapt to accommodate shifting audience tastes and the box office challenge from an ascendant Golden Harvest. They would limp on for another 12 months or so after this but only made a couple more films of note, and none that come close to this... if we consider this to be the finale for the old school though, it's one hell of a way to bow out.

It stands as a testament to the genre's evolution over the previous decade and a half, and one of the highlights of the Shaw Brothers catalogue... in fact if you are only going to watch one Shaw Brothers film you should probably make sure it's this one... everything you need to understand why the company was so important and influential, and is still so beloved, is contained within it.