Directed by
Genre
More enjoyable than I'd expected. 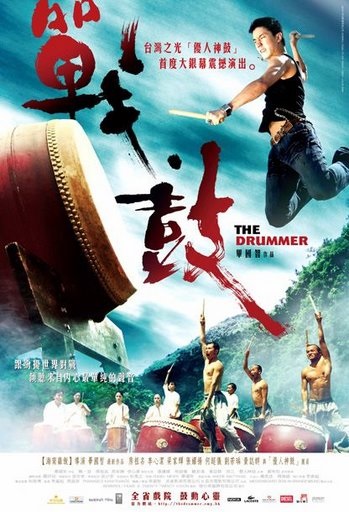 Sid (Jaycee Chan) is the son of a gangster with a hot temper (Tony Leung Ka-Fai), and has quite a bit of anger of his own - some of which he takes out on a drumkit, some of which he channels into getting himself into trouble. After one such instance his dad has to send him off to Taiwan to hide, sending his right hand man (Roy Cheung) along to look after him. Sid happens upon a troupe of tribal drummers rehearsing in their mountain retreat, and decides that joining up with them will alleviate the boredom a little. His erratic, aggressive and individualistic drumming style is at polar odds with the synchronised team-work that creates the rhythms in the drumming group, and his anger and emotion are wholly incompatible with the Zen philosophy that the group adhere to, and their drumming promotes. It's not at all clear why they let him join the group, but you can probably guess who learns from who.

The movie's central theme of calmness and tranquility being a better lifestyle choice than anger and violence is hardly revolutionary, but the use of real-life performance drummers U-Theatre to deliver the message makes it interesting. The group train in martial arts to achieve the physical fitness and mental calmness necessary to create their work, and the movie is in many ways an update of the Shaolin film (e.g. 36th Chamber). The message is all a bit new-agey (folk wisdom and Zen), and your openness to such ideas will probably play a large part in determining how much you enjoy it. I'm no hippy, but the message that modern life is killing us is one that does resonate with my recent experiences, so I can somewhat relate.

The film is mostly shot in the mountains in Southeast Taiwan (around Taitung), and Bi uses the photogenic location to great effect, showcasing the tranquility and natural beauty of the area. U-theatre are clearly not professional actors, so Angelica Lee is drafted in to handle the scenes where any serious acting is required... she manages to look surprisingly professional with the drums, too. I never expected to like Jaycee Chan after his entirely un-earned leading role in Twins Effect II, but he is surprisingly effective here... the kid can actually act. The uncanny resemblance to his father is probably going to hinder him in the long run as much as it helped him get started, as it is impossible to look at him and not think about Jackie (in this case, comparisons with Drunken Master seem inevitable). Big Tony basically reprises his role from Election II, but he does it brilliantly.

The film is blatant festival-bait, though probably too trite to be given much credit, but I found it more enjoyable to watch than I'd expected.