Directed by
Not worth the effort 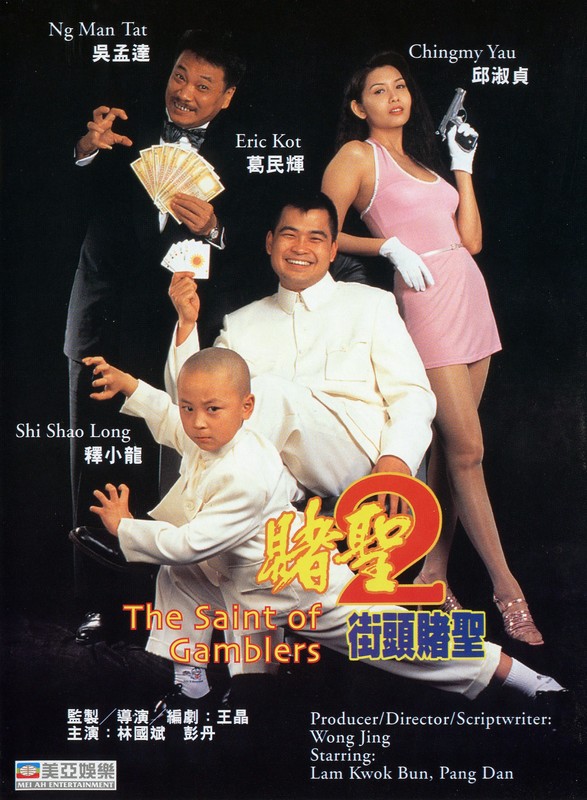 Wong Jing tries to squeeze one more drop out of the gambling comedy cash-cow with a spin-off from the All For The Winner branch of the tree (hmmm, cows on trees... that's a strangely apt image for this film).

Having lost his major stars - Chow Yun-Fat, Andy Lau and Stephen Chiau - Wong scrapes the bottom of the barrel and gives us Eric Kot as the new Saint Of Gamblers (whom Ng Man-Tat finds in the same village that Stephen Chiau came from). Eric plays an idiot named "God Bless You" for unamusing reasons, who has supernatural powers but no gambling skills. Ah Tat enters him in the International Gambling Championship anyway, because... well, it's a Wong Jing script.

The film is very lazily plotted, regurgitating elements from previous films in the genre with only a threadbare narrative to hang them together. The film doesn't spend much time on the story, preferring to focus on painfully contrived "comedy" situations that would struggle to raise a laugh even if they weren't so sloppily directed. The whole script feels like an insult to the audience's intelligence. At one point a journalist asks Eric Kot what films he likes and he replies "Wong Jing", which earns him a slap and a reprimand from Uncle Tat:

"Why do you say Wong Jing? His movies are so cheap - say Wong Kar-Wai"

It's a mildly amusing moment until you realise that coming in this particular film it's just too true, and you feel that slap yourself.

Even the gambling scenes in the film are dull... the gamblers invariably start off with near perfect hands and it's really only the use of supernatural powers that decide the winner in many cases... no real skill or cunning, and no tension since the winner is never in doubt.

Although the majority of the film is utterly contemptible, it has a few virtues. One of these is Sik Siu-Lung, a kung fu kid who has just as much skill as Tze Miu from My Father Is A Hero but isn't quite as cute. The other is Diana Pang Dan, whose uncannily large breasts are naturally exploited to the max by Wong Jing, and whose character is by far the most interesting in the film. Chingmy Yau is completely upstaged by her, which must have hurt. Donnie Yen also puts in a brief appearance and allows us to bask in his radiant ego for some absurdly undercranked fight scenes which are moderately entertaining (but Sik Siu-Lung impresses more, which must have hurt too!)

Although it's not aggressively unpleasant, there's really too little of virtue to recommend watching the film unless you're Diana Pang Dan's #1 fan. To top it all off, the DVD has one of the worst sound mixes I've heard!

aka SAINT OF GAMBLERS 2 - a nominal sequel to ALL FOR THE WINNER, or TOP BET, or GOD OF GAMBLERS II or CASINO RAIDERS II, or... something!