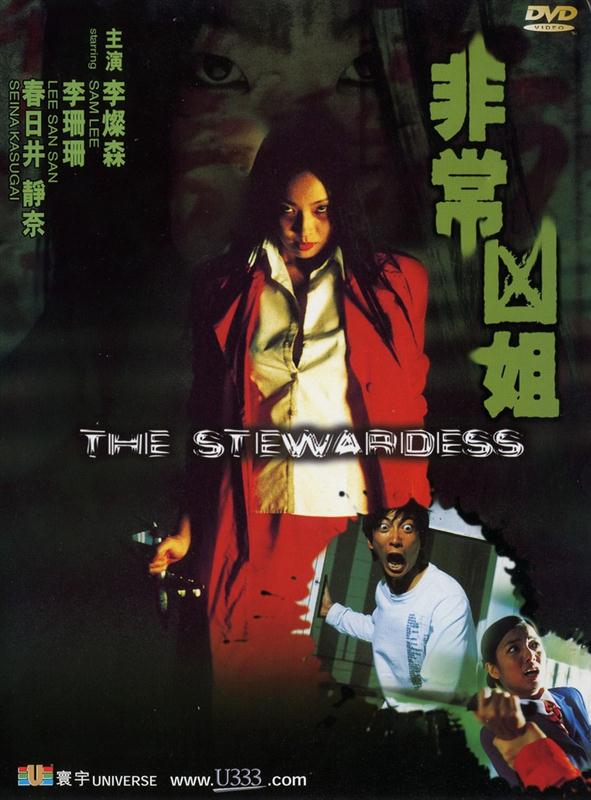 THE STEWARDESS seems to have got lost in the wave of horror films that followed THE RING, probably because the DVD artwork unfairly makes it look like just another "long black haired girl is scary" film, when in fact it's a rather sophisticated black comedy that pokes fun at numerous genres, including those post-RINGU horror films but not limited to them.

Sam Lee is a bit of a womaniser, but finds himself in a spot of bother when he beds an air hostess (the stunning Lee San-San) who turns out to be the daughter of a Triad boss... and the girlfriend from hell! His troubles go from bad to worse when a Japanese air hostess moves in across the corridor from the couple. Much, much worse!

The film is a smartly written genre-blender, cheerfully poking fun at horror films, gangster films, gigolo films and whatever else gets in its way. The comedy is dark, which is why it can successfully co-exist with the scares, and it's very stylishly shot and scored. Sam Lee makes the most of his inherently funny face again, and the rest of the cast all put their various talents to good use too. The film undoubtedly belongs to Japanese actress Seina Kasugai though, who is clearly having a whale of a time with her character, who drifts through the HK world speaking mostly Japanese as if she belongs to another universe entirely. And maybe she does!

Director Sam Leong has made a string of decent but not exactly remarkable films now, apparently specialising in HK-Japanese coproductions (there are prominent Japanese actors in all his films anyway). I don't know if he's well known or liked in Japan, but his films haven't exactly set the box office alight in Hong Kong. I guess they do well enough on home video to get him more directing gigs though. Of the other films I've seen of his, nothing indicated that he was capable of producing something quite as smart or original as THE STEWARDESS (which he wrote, produced and directed). I think it's fair to assume that Takashi Miike's Audition was an influence on the film, but it's certainly not a rip-off on any level, and is much funnier. It's much more the sort of film you'd expect Miike to produce than the dismal One Missed Call, though. It's painted with a distinct HK flavour though, that recalls the films of Edmond Pang Ho-Cheung to a degree.

Comparing it with the work of other directors is a little unfair though, as Sam Leong has created a distinctly original piece of work and deserves all credit for it. It's a shame that it seems to have largely slipped between the cracks, as it deserves to be seen by a far wider audience than the endless Ringu knock-offs that get released on DVD and signed up for Hollywood remakes all the time.