Directed by
Genre
We All Just Wanna Avoid Pain 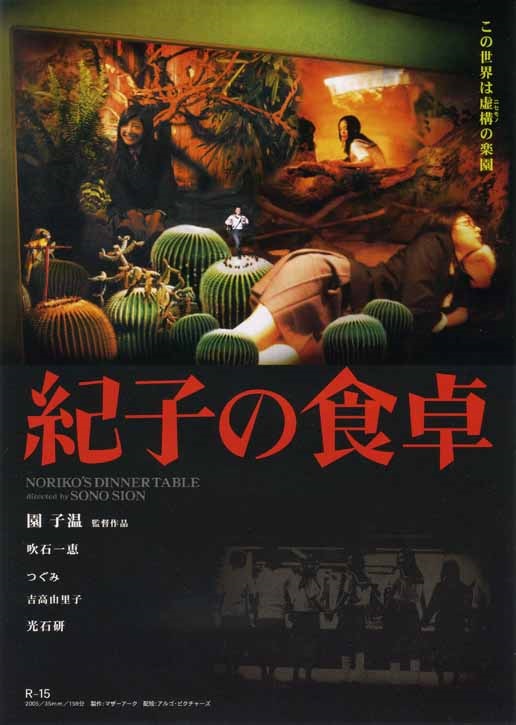 17 year old Noriko is a frumpy and awkward girl living in a backwater village with her parents and younger sister, but who dreams of a bigger life. She creates a persona named Mitsuko on an internet message board and makes virtual friends with some girls in Tokyo. One day she leaves home under cover of darkness and heads to the city, where she meets one of the site moderators, Kumiko, who introduces Noriko/Mitsuko to her family.

And then her other family. And another.

It turns out Kumiko runs a family rental agency, where people can hire people to pretend to be their family for an hour or a day. Usually these are lonely people who miss family they lost, who want to be able to live the life they can no longer have, for a while. Mitsuko joins the team.

After Noriko's sister Yuka also finds the site and then disappears, the girls' father starts trying to track them down, researching their lives on and offline to get an idea where they might have gone. The more he learns, the more he realises he never really knew his daughters at all.

NORIKO'S DINNER TABLE is a sort of prequel-sequel to Sion Sono's breakout film Suicide Circle - I should probably have rewatched that before I attempted to watch this, as after 17 years my memory is pretty hazy. That's not a crippling problem as it's more of a spin off or side story than a direct sequel, but it does reference the earlier film more often and directly than I expected.

SUICIDE CIRCLE was a deliberately obtuse film, presenting multiple alternative narratives and leaving it up to the viewer to decide which represented reality, if any. NORIKO'S DINNER TABLE is no less challenging, mixing reality and fantasy and keeping the viewer guessing about where the lines are drawn. It does so to offer a commentary on the lies we tell ourselves and each other and the personas we create in the process, to return to the question which SUICIDE CIRCLE challenged the viewer to answer:

What is your connection to yourself?

I suspect something is lost in the translation but the question seems to contain elements of how well you understand yourself, how you feel about yourself and whether you are living life in a way that is true to your feelings and beliefs. It is a question that many characters in Sion Sono films seem to find hard to answer, and is perhaps a theme that unifies much of his work.

Kumiko seems to believe she has the answer, that since everyone lies one should embrace it, live the lie you want to live (or any lie somebody is willing to pay you for), define your own reality.

At first Noriko feels liberated by her new life, but after she witnesses the mass suicide that opens SUICIDE CIRCLE, in which several of the participants were girls she knew from the website, she loses herself more and more in her roles, eventually denying that her original identity ever existed. Is that really being connected to oneself?

NORIKO'S DINNER TABLE is another Sion Sono film about damaged people and dysfunctional families, putting it in the company of the likes of Guilty of Romance and The Forest of Love - and like those films it goes to some dark places.

It's a challenging and thought-provoking experience, which relies less on shock value and gimmickry than SUICIDE CIRCLE, but perhaps isn't up to the level of confidence and surety which he would reach in later films. As such, it's probably not where you would want to start your Sion Sono journey, but it's definitely a noteworthy step on his development as a film-maker.