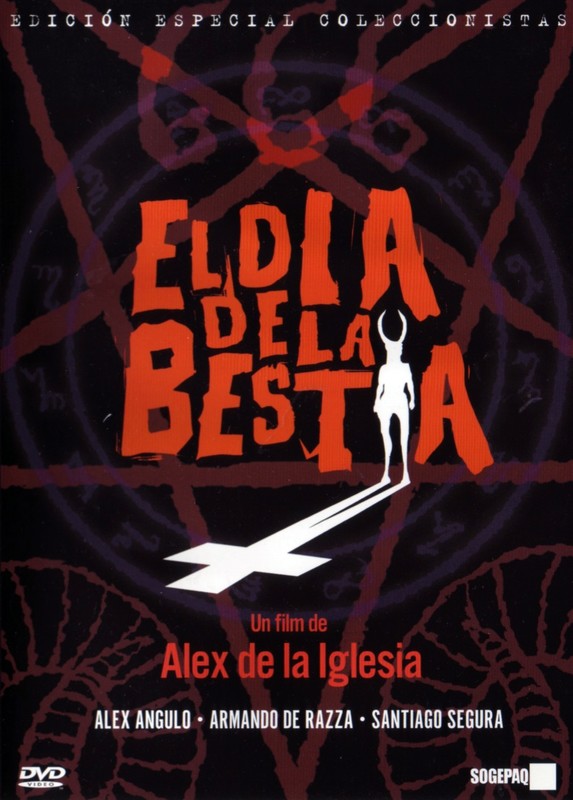 Father Angel Berriartua is a Catholic scholar who has spent his career looking for a coded message in Revelations. After decades of research he finally cracks the code and discovers that it represents a date - the day the Antichrist will be born and the world will end. After doing the maths he realises that the Day Of The Beast is just a few days away.

Angel resolves to stop the Antichrist, but to find out where it will be born he concludes that he needs to summon the Devil and sell his soul - and to summon the devil he needs to be a sinner, so he sets out to become one. Looking for coded messages in Heavy Metal music leads him to metal fan Jose Mari, whose help he recruits to find a famous TV psychic that has written a book about how to summon the devil.

EL DIA DE LA BESTIA is a very metal film, a twisted black comedy that's over the top and full of energy. I first saw it as part of a Halloween horror triple bill some twenty years ago, so Halloween seemed like a good opportunity to put on my recently acquired bluray of it (and vice versa). It turned me into an instant Alex De-la Iglesia fan when I saw it the first time, which is no bad thing to be.

De-la Iglesia directs his second feature film with style, deploying some kinetic camera work and groovy special effects (for the time) with skill. The script is witty and irreverent, and the editing shows a great knack for comedic timing. Alex Angulo is terrific as the mild mannered priest driven to sin and Santiago Segura is adorable as the good natured metalhead that signs up to the cause.

The film does get bogged down a bit for a while towards the end, but it pulls itself together again for a thrilling climax.

I still don't really understand horror films so I find it hard to say if this is one - it certainly wears the clothes of one, but I find it much more amusing than frightening - but I feel the same way about a lot of films that other people call horror so what do I know?

For me the most chilling part of the film is nothing supernatural, but the background of fascist violence that it depicts, with gangs targeting immigrants and the homeless with violence under a slogan of "Clean up Madrid". This is horrifying in the true sense of the word, for me, being all too familiar in 2020.

So I don't know if I did Halloween right tonight, but I certainly enjoyed myself so I'm not going to apologise for it!