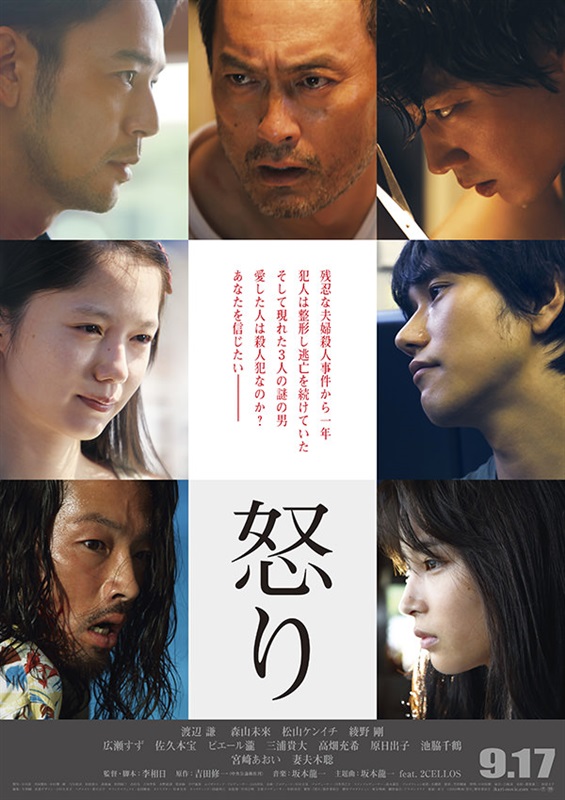 A couple are found brutally murdered at a gruesome crime scene, where the perpetrator has daubed a single word on a door in their blood: RAGE. They identify a suspect from fingerprints and put out a national alert with his photo, but after hearing nothing from the public they conclude that the suspect must have changed his appearance.

In coastal Chiba prefecture a mechanic takes on a part time worker who is new in town, but when his daughter starts getting close to the stranger he wonders what the man's past is.

In Tokyo a gay man meets a stranger in a sauna and takes him home, eventually offering him a place to stay since he is new in town and doesn't have a home or a job there yet.

In Okinawa a teenage girl and her mother move to an island community, where she encounters a backpacker living in the ruins of a military bunker on a tiny island, where he seems to be avoiding contact with the outside world.

Three strangers with mysterious pasts, one murderer, and no way of knowing which of them it might be... if any. The film is in no hurry to tell us, instead taking its time to paint a picture of the communities in which each of its parallel threads is set, and the people that have let a stranger into their lives in each one.

The film might well have been called Trust rather than Rage, as that is the main theme. How can we trust someone whose past we don't know, and can we ever really know their past? But if we never trust anybody enough to let them into our lives, how diminished would our own lives be?

The film is based on a novel by Shuichi Yoshida, and features the kind of rich characterisation which novels excel in but which is often lost when words are translated into images. Director Lee Sang-il manages to create detailed characters without resorting to excessive exposition or dropping in on their internal monologues, instead drawing out exceptional performances from his cast and skilfully selecting the situations to put them in to show us who they are.

The film focuses less on its three mysterious strangers, who are after all mysterious, than it does on those around them. A father and daughter, a mother and son and a pair of new friends all have their own tenuous relationships which are affected by the introduction of a third party.

The film's rich characterisation does not come at the expense of visual splendour, with some beautiful cinematography throughout (but especially in the gorgeous Okinawan islands). There's nothing too flashy or overt but everything is captured with precision. The soundtrack from Ryuichi Sakamoto also lends the film an above average sheen of professionalism.

You probably wouldn't go into a film called RAGE expecting something light-hearted, and even if you somehow did the opening shots of a bloody murder scene would quickly set you straight. It's a film that touches on some dark aspects of human nature, and puts its characters through some difficult experiences. It's reminiscent of Guilty of Romance in the way a gruesome murder bounces us off into a story of characters whose lives have a brush with the dark side.

Lee Sang-il's previous film based on a Shuichi Yoshida novel, 2010's Villain, didn't impress me, it felt artless and technically lacklustre. Apparently I'm in a minority as the film won several awards, so maybe I need to give it another chance some time, but I felt that RAGE actually delivered what VILLAIN only promised.