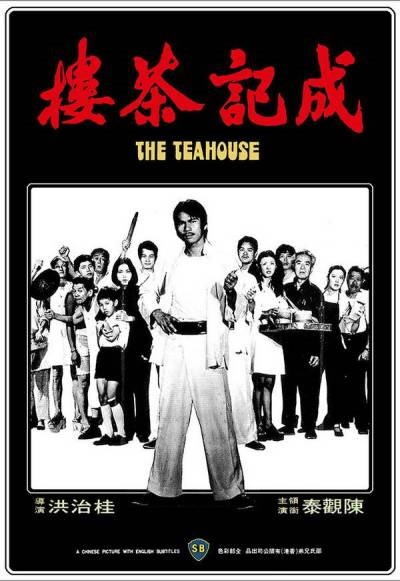 The Tea House is my first non-kung fu Shaw Brothers movie! It's a fairly gritty drama about a bunch of mainland (?) refugees that open a Tea House in Hong Kong, where all they want to do is lead a simple life. Sadly, Hong Kong's criminal fraternities aren't inclined to let people get away with such things.

The Tea House is an angry movie, and it's angry about crime - mainly about the Triad societies, and what they are/were doing to society. It's also angry about the justice system that was apparently too lenient on young offenders (the courts said it's not their fault, society is to blame and let them go) and ineffective against the big criminals that can live as VIPs in society. Chen Kuan-Tai plays Brother Cheng, the dai lo of the tea house, who wants to be a straight businessman but gets drawn into the criminal world as he tries to fight it. When the law can't/won't protect honest citizens, those citizens can't always stick to the letter of the law if they want to survive. Or something. Vigilantes are cool, maybe.

The movie is quite down beat, with a fairly bleak view of human nature overall, but there are characters such as Brother Cheng and sick mother Karen Yip who show that people can be virtuous if they make the effort to stick to their principles, and that society can be a good place if that's how people behave. It concedes that such people won't have an easy time if they choose to live the good life though. But the path of virtue is ultimately worth following.

The script does occasionally come off a bit like a sermon, but this doesn't detract from it being a well developed drama. The script and direction are of a high quality, and the performances are mostly very good. Chen Kuan-Tai has a lot of presence as the calm, quiet Cheng. Even though he doesn't actually have all that much to do in the movie, there's no doubt that he is the main star.

The movie betrays its origins in the 70's in a few places, most obviously trousers and the funky music. Otherwise it feels quite modern, especially with the inventive and stylish cinematography. There's a lot of very creative and effective camera angles that occasionally made me think I was watching a Wong Kar-Wai movie

Ching Siu-Tung has the credit for action director, but it's a far cry from the graceful wire work he's best known for. The mode is "brawl", with lots of smashing of chairs over heads and grappling to the ground and flailing of long knifes. It's quite engaging action, but firmly in realistic territory. The action is not really a reason to watch the movie.

The Tea House is a well crafted movie with a solid script, strong performances and capable direction. The cinematography is the only thing that really stands out as being of superlative quality though. Not an essential purchase, but definitely worth a watch.