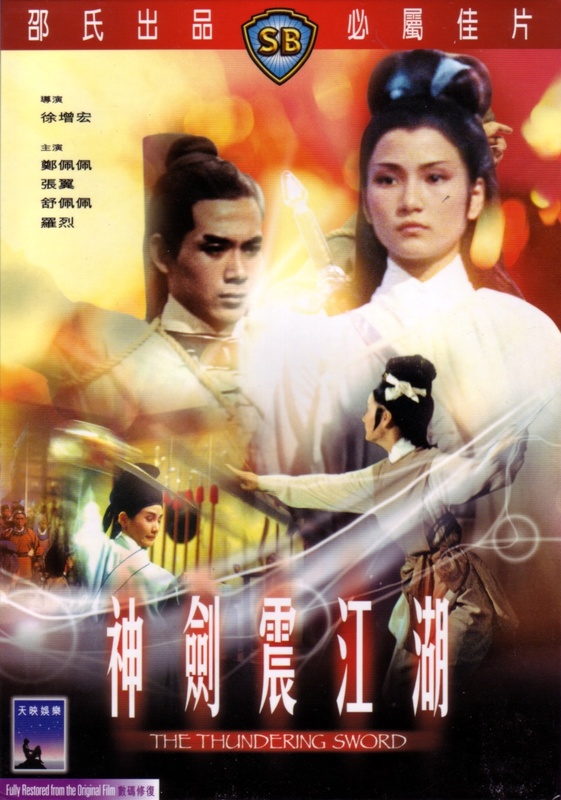 It's no secret that I'm partial to a bit of Cheng Pei-Pei, or that I'm more fond of the romantic wu xia films that were most common in the 1960's before Chang Cheh's influence turned things all macho (except for Chor Yuen, who kept up the good work on the wu xia front into the 80's). I also seem to be rather more fond of director Hsu Cheng-Hung's debut Temple Of The Red Lotus than most... so you might want to bear all that in mind when I mention that I loved THE THUNDERING SWORD, 'cause it's very much my sort of film. However, I think that it can objectively be described as a slightly flawed classic.

Legend tells of a mighty weapon called "The Thundering Sword" that has the power to bring doom to the Martial Arts world, so teacher Tien Feng sends his two best students (Chang Yi and Lo Lieh) out to find it so that he can destroy it. Both of them are barely out of the door before they (separately) bump into Cheng Pei-Pei, No. 1 daughter of the "evil" centipede clan - however, their encounters are quite different. One manages to set Pei-Pei's heart a-flutter with love, whilst the other gets a bunch of poisoned darts in his chest from her. This sets the stage for a tragic love story set amongst the machinations of the martial arts world, helped along by the fact that Pei-Pei naturally ends up in possession of The Thundering Sword... a weapon that many would kill to possess.

The story of The Thundering Sword relies on some heavy coincidences... or one might say, rather, that the story is such a powerful one because of all the coincidences, and we can easily imagine that there were many other stories without the coincidences that just weren't worth making into a film? Well alright, some of those coincidences are really contrivances I suppose, but it still makes for a great tragic romance. In fact, this may be the only martial arts film that's actually made me cry! The story deserves the status of "classic" for that fact alone, but also because many elements of it appeared in countless other films over the years - notably Chor Yuen's Web Of Death, which is virtually a remake of this film.

The film is beautifully shot, as is the case with most Shaw Brothers wu xia, with vibrant colours and beautiful set designs and costumes. The film definitely shows its age, with a theatrically that reminds one of the origins of this genre in Chinese opera - but I think I like it all the more for this fact. Other signs of age include some of the action scenes, which aren't going to appeal to hard-core kung fu fans, but are quite fun to watch - Cheng Pei-Pei gets to show her grace with both whip and sword, and there's some fanciful leaping and some amusing bits of gore (sixties style). Perhaps not staged or filmed as well as the previous year's Come Drink With Me, but good enough for the purpose.

The real joy of the film comes from Cheng Pei-Pei's performance though. She goes from love-sick puppy dog to no-nonsense "I kill you now" and remains charming and captivating at either extreme. This is one of the most developed dramatic roles I've seen her in, and it's impossible not to adore her. Most of the remaining cast give good performances too, though leading man Chang Yi is somewhat lacking in acting skills and charisma (it would have been better if his role and Lo Lieh's had been swapped, or better still if he'd been replaced by Yueh Hua). There's a bunch of familiar faces from the era present in the film, with Ku Feng making a particularly strong impression in one of the smaller roles.

Mention must go to the film's soundtrack, which contains some lucious orchestral pieces that really swell with melodrama at the right moments, and a few traditional chinese songs that add to the film significantly. However, the foley effects fare much less well, and in places are downright awful (I only really noticed this at the start of the film, but it may just have been that I got used to them after a while).

So, on occasion the film has some rough edges that perhaps keep it from being a true classic, but they weren't enough to stop me enjoying it greatly. You may have to make some effort to look past the flaws (and remember when it was made), but I recommend seeking the film out, as it's surely an important piece in the Shaw Brothers and Martial Arts history.

Remember to have some tissues on hand at the end though :D