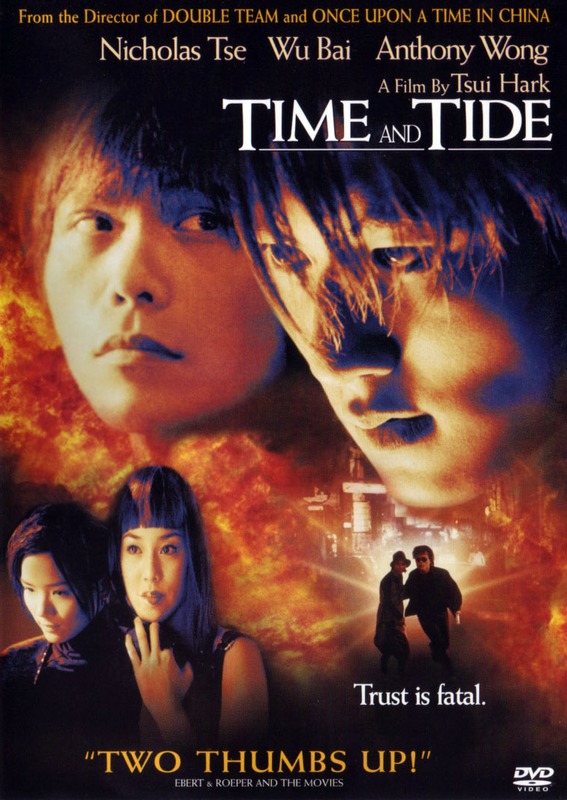 OK, I've watched TIME AND TIDE four times now, and I can finally say I understood it all. The whole story arc, and practically every scene! I liked it before I understood it, and I like it just as much now. Those that say it has no plot just haven't paid enough attention! There's plenty of plot there, but the way the film is edited means that you have do some work to make sense of it all. It's said that the original cut of the film was about 3 hours long, but Tsui Hark either decided or was persuaded to cut it down to a more theatre friendly 110 minutes. To do so, he went all Wong Kar-Wai on the film, apparently cutting out most of the scenes that explained what was going on and leaving a story that's told mostly through incidental details and reactions. Perhaps he should have called the film IN THE MOOD FOR BULLETS :D

For those wishing to know what the plot is without going to the trouble of watching the film four times, here's a synopsis:

A gang of mercenaries in South America betrays one of their members. A Taiwanese guy called Juan (Wu Bai, going by the name Jack in most scenes). He's not best pleased and takes a case of their money, hoping to settle in Hong Kong with his pregnant wife (Candy Lo). The gang feel that their reputation will be ruined if one of their members "beats" them in this way, so they follow him to Hong Kong to get the money back and restore their good name in the mercenary world.

Meanwhile, Nic Tse is a young guy with little purpose or direction in his life, who accidentally gets a girl (Cathy Tsui) pregnant in a drunken fling. 9 months later, she doesn't want to know him but he feels responsible, and wants to at least provide financial help. He borrows some money from Anthony Wong, and agrees to work for Wong's bodyguard agency to repay it. A job brings him into contact with Wu Bai, who he also met in a chance encounter at a shop. The two hit it off and become friends. This is complicated when the mercenaries turn up and give Wu Bai a task to complete to make a truce - Wu Bai ends up assassinating the guy Nic Tse is protecting.

Nic gets into a whole lot of trouble because Wong and the cops believe he was involved in the assassination, so he goes after Wu Bai to get an explanation. Unfortunately, this gets him caught up in the deadly game that Wu and the mercenaries have to play to settle their relationship once and for all.

There, it's not all that complicated once you've understood it :p The trick is just piecing together the scraps of information Tsui Hark feeds you until you have enough to fill in the picture.

Tsui Hark said he wanted to create a "new language of cinema" with TIME AND TIDE - a different way of telling a story. It's yet another brave innovation by this ever-creative filmmaker, but unfortunately one that left a lot of the audience behind. Although it owes a lot to Wong Kar-Wai's films, TIME AND TIDE is still a unique and envelope-pushing film, which many people already recognize as a classic Hong Kong movie. Not so many people in Hong Kong though, apparently, as the film flopped at the box office. Along with the disastrous performance of Legend Of Zu, Tsui Hark's return to Hong Kong filmmaking pretty much ruined his career. The (this time deservedly) loathed Black Mask 2 was another nail in the coffin, and now the director who ruled and defined Hong Kong cinema for over a decade is having real trouble getting financing to make any more films.

Although BLACK MASK 2 deserved every criticism it got, and LEGEND OF ZU deserved a lot of them, TIME AND TIDE is a truly under-rated masterpiece. It's innovative and accomplished in many ways, most especially the action scenes, where Tsui Hark created yet another new way to stage and shoot action... how many times has he done that in his career now?

T&T's action scenes are mostly gunplay related, but quite different in style from the John Woo style that most Hong Kong films have sought to emulate (and which Tsui Hark probably had some part in creating). The gunfights take place between highly trained and skilled professionals - masters of strategy and technique, with Wu Bai being the best of them all. It's amazing the number of new things Tsui Hark and choreographer Xiong Xin-Xin manage to find to do with gunplay and some subtly wire-enhanced martial artistry. T&T contains some of the very best action scenes a Hong Kong movie has contained - helped massively by Tsui Hark's ever-inventive and imaginative camera work.

TIME AND TIDE is most of all a stylish film. The way the whole film is shot and edited is technically very slick, and artistically very beautiful. Not as stylized as Wong Kar-Wai & Christopher Doyle's collaborations, but still full of great images.

I expect many people will never be fans of the film, but I imagine that as the years go by more and more people will come to see it as a classic that perhaps came at the wrong time for the audience to really appreciate it. One is reminded that even great films like Ashes Of Time have flopped at the box office too.

For all the Wong Kar-Wai references in this and other reviews, the film is still something that only Tsui Hark could have made. It's as different from most of his other films as many of them are from each other, which is one of the things that makes him such a remarkable filmmaker. I really hope his career gets back on track soon, and we start seeing more wonderful films from him!

Editor's note: after a fifth viewing I'm not sure that synopsis is exactly correct!