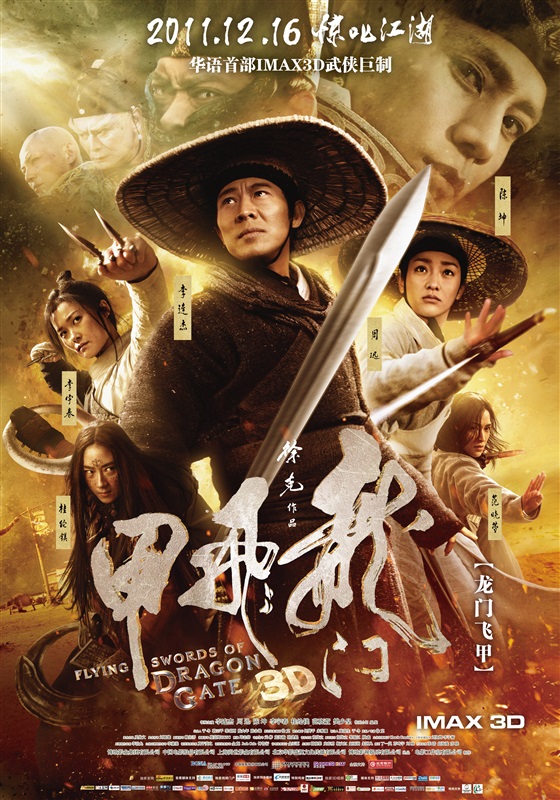 Tsui Hark goes back to the well to draw fresh inspiration, returning once more to King Hu's classic Dragon Gate Inn - which he already remade rather wonderfully in 1992. The story is given a fresh set of details to flesh it out, but the basic skeleton remains the same - evil eunuchs, patriotic rebels and independent forces of uncertain allegiance all converge on the eponymous inn, where identities are masked and secrets concealed until a game of wits allows the various parties to ascertain where they all stand - and exactly whose ass they need to kick.

This is not the first time that Tsui Hark has convinced himself that one of his classic films really needed was an update with loads of CGI - witness Legend Of Zu in 2001, an exercise which failed to convince anybody else of that viewpoint. This time he has an extra decade of Chinese experience in CGI to draw on though, and what's more... now he can do it in 3D! Well, I will have to take the internet's word for that, 'cause I watched in boring old 2D (albeit HD). Can he convince us this time that computer graphics are the tool he's been waiting for all along to truly unleash his imagination?

No, he can't. Aside from a few impressive moments, the CGI still looks rather fake, and fails to impress or engage as well as the low-budget special effects (wires, clever camera work) that made the 1992 film such an impressive spectacle. Furthermore, he seems to have failed to note the main lesson that caused Legend of Zu to rank so much lower in fans' hearts than its 1983 predecessor... all the special effects in the world won't engage an audience if they don't get involved in the story. Well-defined, likeable (or hateable, where appropriate) characters whose fates we actually care about will encourage us to forgive any weaknesses in the special effects, but the converse is rarely true. FLYING SWORDS OF DRAGON GATE fails to deliver on characters, and fails to develop the script. The film begins by introducing the political intrigues of the court and the rival factions of the Eunuchs, then fails to provide any particular relevance to this fact. Jet Li plays a rebel who we assume to be patriotic, but doesn't actually offer any explanation whatsoever as to as his motivations, his particular plights, or much of a character at all (though he gets more than most). Various groups are introduced, and brought together at the inn, then the film sort of flounders for a little bit before everybody just sort of decides its time to start fighting. The sense of intrigue, the subtle details, the game of wits as these master fighters outsmart and outguess each other... the actual meat of King Hu's original film, in other words... pretty much replaced by 'one of the good guys happens to look exactly like the chief bad guy'.

Oh well, Jet Li's on hand, so at least there must be some spectacular action, right? Oh yeah, I forgot... he got old. There are some nicely choreographed action scenes in places, but with too much reliance on CGI of mixed effectiveness.

Maybe I'm viewing the older films with a touch of rose-tinting, or maybe I'm just getting old and tHe KidZ will see the many virtues of the latest attempt to improve a classic that I'm missing. It probably did look quite spectacular in 3D-capable cinemas... but I am yet to be convinced that that can ever take the place of a well written script, or a director who still remembers that he has human actors on set somwhere, and getting a great performance out of them is probably the most important part of his job.

Released to cinemas in 3D