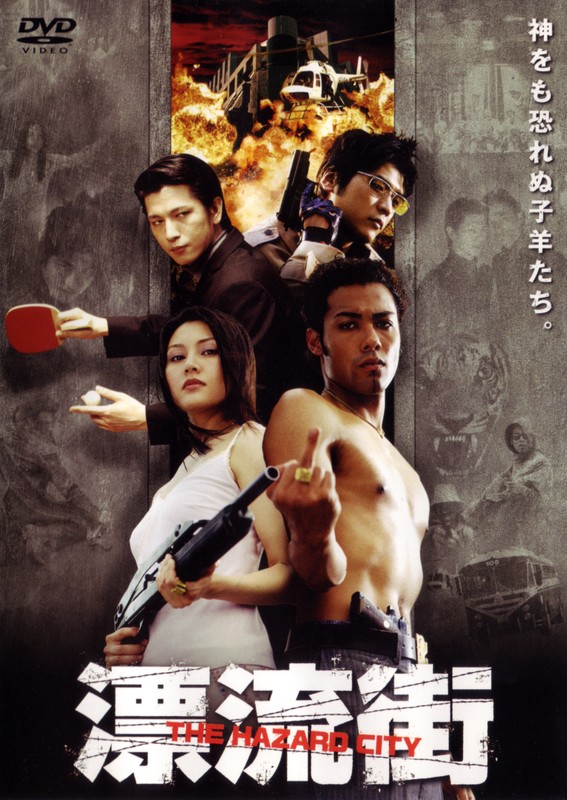 The film starts with Michelle Reis writing a letter telling her mother that she is in love with a Brazilian man who is "strong and kind". We then see the sleeping back of said Brazilian as CG butterflies flit across the screen. One settles on his shoulder and melts into the skin, becoming a tattoo that he will wear to the end of the film. Next we see Michelle on a bus with armed guards set to deport her from Japan. Her boyfriend steals a helicopter by force and stops the bus mith a machine gun, killing the guards in the process. He then whisks Michelle away to freedom.

All of which sets the scene for what is to follow in this remarkable film. Strange and fascinating characters cross paths in a plot that is broadly irrelevant, except as a vehicle for bringing these characters together in a series of surreal events and encounters, not a few of which are also rather violent.

Our "cool Brazilian bastard" hero and Michelle wish to marry and settle down abroad, but events and people would seem not to want them to. CITY OF LOST SOULS has a richly populated universe - a Japan where Japanese is barely the dominant language spoken, and characters of comic-book archetypes in appearance but anything but that under the skin. The comic-book feel pervades much of the film, especially in the occasional CG enhanced shots that surely deserve an award for the best use of CG on screen - to push reality where it could never otherwise go.

The script also has comic book touches, blending the dark and brutal with the strange and hilarious quite un-self-conciously. Miike shows here why his name is so revered - truly an artist pushing boundaries hard. I look forward to more of his films heading west (I'm determined to see DEAD OR ALIVE one day, circumstances having conspired to make me miss 3 festival showings so far!).

Takashi Miike's comic-book exterior disguises a far from stereotypical cast of characters in a strange and freshly directed movie. Recommended!

aka THE HAZARD CITY or CITY OF STRANGERS.