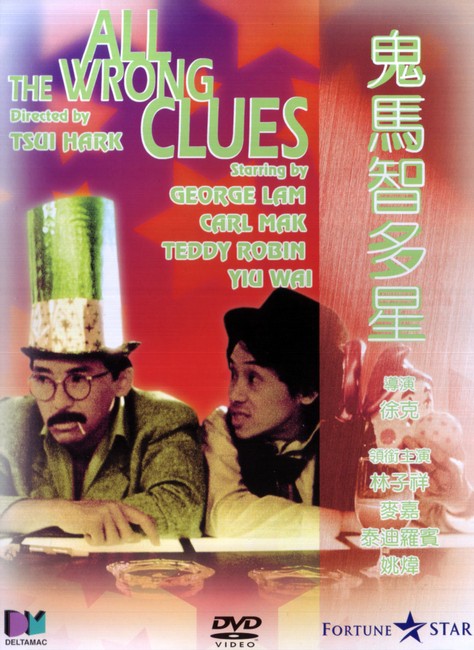 Notorious villain Ah Capone comes out of prison and swears to take vengeance on Toho, the private eye who put him behind bars... but not before he's used him as part of a con scheme he has been planning. Toho's childhood friend, Chief Inspector Robin, learns of the danger and decides that Toho would be safer behind bars... but Toho is not willing to stay there for long.

ALL THE WRONG CLUES - FOR THE RIGHT SOLUTIONS is not really the sort of film where a plot summary serves much purpose... the story is convoluted but only vaguely relevant, since it's really a film about the gags and set pieces. Tsui Hark's first film for the upstart Cinema City is an anarchic comedy which lurches between slapstick, parody and farce, and where narrative integrity is low on the list of priorities.

Things start off silly and descend quickly into the ridiculous and absurd, with multiple scenes that might be expected to further the plot seemingly being abandoned when the opportunity for a silly gag rears its head. It reminds me of Hollywood silent era comedies - though my familiarity with those films is more by reputation than experience (don't think I've ever seen a Marx Brothers film, except for the occasional clip!) so I could be completely off-base. It's at least as nonsensical as any of Stephen Chiau's mo-lei-tau films, though the humour is generally a lot broader than even Chiau's goofiest gags.

The film was a box office hit in Hong Kong, and helped to launch Cinema City's fortunes. Cantonese comedy does not always travel well, though, and even though ATWC relies less on untranslatable verbal gags than the average Stephen Chiau film, there is perhaps something in the style that local audiences enjoy a lot more than foreign viewers.

The influence of producer Karl Maka is strongly apparent on the film - when he and Dean Shek founded Cinema City the mission statement must have been to bring their particular brand of goofy comedy to Hong Kong's screens, and evidently they thought that Tsui Hark was the right director for the job. Eric Tsang shares a similar love for slapstick, and it is no surprise to find him in a substantial role here. Diminutive composer Teddy Robin has the best role, though, as the implausibly suave and tough chief of police. Seeing him duke it out with Bolo Yeung - and triumph - is one of the highlights of the film. George Lam is somehow both less implausible and less convincing as the lady's man P.I.

Watching ALL THE WRONG CLUES, I found myself wondering what my response would be if somebody walked in and saw it, or even a part of it. I concluded I'd find myself somehow attempting to explain or justify myself - make references to the cultural and historical context, and the careers of the various talents involved in its production, etc. Just letting them observe without comment didn't seem like an option - a fact which suggests that it isn't a film I would ever consider showing to the uninitiated. Whilst Stephen Chiau's nonsense comedies (a few of them, anyway) managed to achieve a worldwide penetration only matched by Jackie Chan and Jet Li, I don't imagine for a moment that the same would be true of this film. Part of that is perhaps just due to production values - though not a bad looking film for its time, there is no question that it shows its age now.

Acually, the film even left me rather nonplussed the first time I saw it - and given how hard it was to acquire a copy of the film for a long time, I was in no way a Hong Kong comedy novice when I finally did. I didn't write a review on first viewing because I really couldn't decide what I thought about it - I don't think I'd expected something quite so nonsensical. Given the almost legendary status of Tsui Hark's hard to find early films, I was probably expecting something a bit more... clever?

It's taken me quite a while to get around to a second viewing to make up my mind, and my verdict is... it's quite a fun film :-) It does take a bit of a shotgun approach though, firing off gags in all directions and hoping that enough will hit their target to do some damage. Clearly Hong Kong's audiences in 1981 felt that it did so, but a quick survey of English language critics in the 21st century suggests a much more lukewarm response. Personally I found the manic invention to be quite entertaining, with enough effective gags that those which fail can be overlooked. It's not a movie I'd ever find myself breaking out at a family christmas gathering though - or indeed anywhere where I might get caught watching it :p