Directed by
7/10 - Zhang Yimou's homage to the female bosom 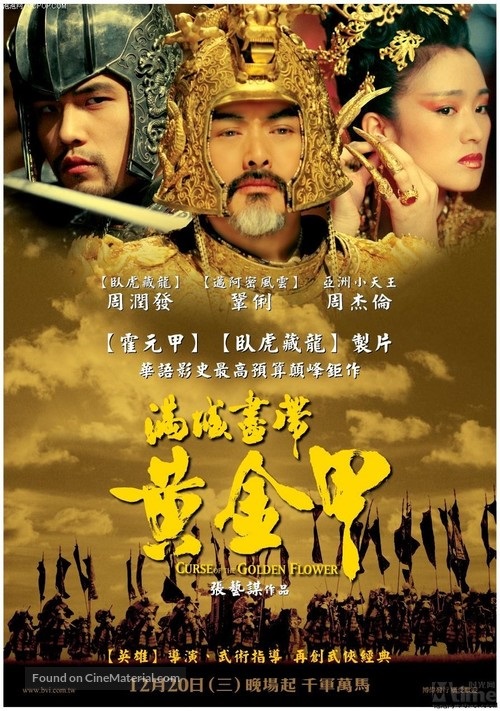 The Emperor (Chow Yun-Fat) and the Empress (Gong Li) do not have a happy marriage, but try to keep up appearances. The Crown Prince (Emperor's eldest son and presumed heir) was born to another woman, and doesn't seem entirely like future emperor material. The 2nd son (Jay Chou) returns from some years on the frontier apparently rather more of a man than he was, and than his elder half-brother still is. Obviously the Empress would rather have her own flesh and blood take the throne.

The story is rather Shakespearean, with more than a few similarities to Feng Xiaogang's The Banquet (2006) in fact, which was based on old Bill's Hamlet. Zhang's story is in fact based on a Chinese play from the 1930's, but transplanted to the Tang Dynasty - which no doubt brings out the Shakespeare-ness of the story all the more.

Curse of The Golden Flower is the latest 'most expensive movie made in China' (a title claimed at least twice a year, it seems), and evidently Zhang Yimou's homage to the female bosom, which manages to dominate the film's visuals even more than the insanely opulent sets and costumes that presumably ate most of that 'most expensive' budget. The focus on bouncing, quivering cleavages leads one to conclude that Zhang has just discovered boobies, rather later in life than most others of his gender, and is still overcome by delight, fascination and awe of the fact that women just carry them around on their bodies, all the time. Although it's Gong Li's cleavage that has got the most tongues wagging, she's actually out-cleavaged by newcomer Li Man.

Besides the cleavage, the film presents the kind of visual splendour that only a period film can - the Emperor's palace is a colourful place, with absolutely no expense spared on creating the sort of lavish, opulent, decadent environment that modern heads of state could never dream to surround themselves with (maybe the odd rapper could). Courtiers by the thousands wait hand and foot on the royals, in absolute obsiequence. Sounds like a perfect life, right? But with little or no external stresses, a family is wont to create them internally - or so we are led to conclude.

CURSE is the first collaboration between Zhang Yimou and Gong Li since 1995's Shanghai Triad, but it's a far cry from any of their previous films, so it's not really apparent that it actually means anything that they're working together again. Of course it is good to see Gong Li back on Chinese screens after a bit of a career lull, and she is as impressive as ever (thinking of her acting here). It's also Chow Yun-Fat's first Chinese-language film since CROUCHING TIGER, HIDDEN DRAGON (in fact, he's hardly done anything since then), and it's also good to see that he can still turn out a good performance when not trying to act in English.

But, whilst it's good to see these legends on screen again, it's not in a film without flaws. Hero was a really interesting work, taking Zhang Yimou's background in art films and cinematography and applying it to the wu xia genre to create a quite unique experience. House Of Flying Daggers was a much more straightforward and commercial film, with some elements of unintentional comedy that were surprising from a director with such a history of smart, keenly observed films and a knack for bringing out career-creating performances from his cast. CURSE is definitely more HOUSE than HERO, with more than a few scenes that had the audience burst out in laughter when that was surely not the intent. There are some especially lamentable pieces of (over-)acting at points, and some plot points that evoked 'huh?' noises or more chortles. Perhaps it's inevitable that with a bigger film (and budget) it's harder for Zhang to keep his eye on all the fine details - though it was largely that eye for detail that made his earlier films so very, very good. Somehow he managed to keep both the big and the small in his eye for HERO, but perhaps he has had to delegate more to assistants on the later films, which I think had shorter production schedules.

It's no secret that Zhang Yimou made a conscious decision to move towards big budget, commercial films, as a strategic move to help bolster China's domestic film industry against the Hollywood machine. I'm not sure whether this has been a success or not yet, but it has produced some interesting movies. Unfortunately, each seems to be slightly less interesting than the last. I'd like to say "I hope he goes back to making smaller movies soon", but he already did that with Riding Alone For Thousands Of Miles, which I thought was boring... so I just hope he makes more good films, whatever budget they have :-)