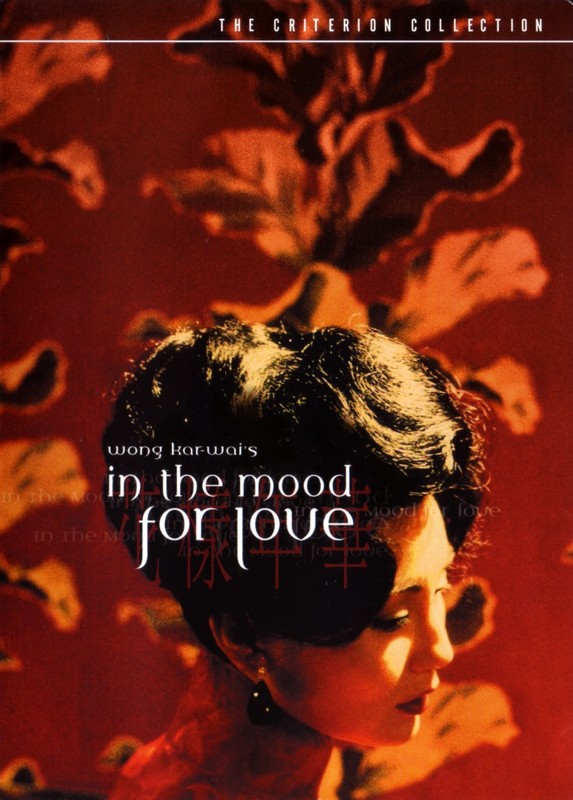 I was both blessed and cursed to see IN THE MOOD FOR LOVE well ahead of the crowd, as the Leeds Film Festival somehow got a print to show before much English language press had surfaced following its debut at Cannes. I got together a group of friends to make the trip, telling them that Wong Kar-Wai was the world's coolest film-maker, with his style marked by flashy camera techniques and visual energy. Obviously I was thinking of something like Chungking Express at the time, and had either forgotten Days of Being Wild or just never expected Wong Kar-Wai to return to the more restrained, sedate style of that film. In fact he goes far beyond it, reining in all his excesses to create an extremely minimalist work that is above all else very SLOOOOW.

There had long been rumours that Wong had planned a sequel to DAYS OF BEING WILD but been unable to make one at the time - the main evidence being Tony Leung Chiu-Wai's otherwise inexplicable appearance at the very end of the film. In fact, I believe that Tony's scene was left over from a separate story Wong had planned to incorporate into DoBW but either abandoned shooting or removed in the editing room. Whether he had intended to make a follow-up all along or the idea was planted in his head by the rumours, I don't know, but a decade later he seems to have ended up making one. The film cannot be called a sequel, as several members of the cast return but in entirely different roles. It may be an alternate-history sort of revisiting of the story, perhaps showing how things might have panned out for some of the characters if Leslie Cheung's York had not kicked their lives off track.

Anyway, debating the matter further is academic, since any connection that ITMFL shares with DoBW is obtuse and circumstantial, as no events from one can be tied to the other in a cause-effect way, making the films essentially independent.

ITMFL tells the story of two neighbours who discover their spouses are having an affair, and try acting out the parts of their other halves to try and understand how it happened. Or rather, it *doesn't* tell the story, it leaves the viewer to deduce it. Maggie Cheung commented in interviews that she was shocked when she saw the final cut of the film, because Wong appeared to have basically cut out the plot in the editing room. What's left is the moments between the plot, the ambient parts of the characters lives, with the 'story' left inferred rather than explained. This is the main conceit of the film, the mark that Wong Kar-Wai has left on it to justify his auteur status. It's a device that Tsui Hark strenuously denies "borrowing" for his 2001 film Time And Tide.

When I first saw the film in the cinema I was taken aback by the major change of style, from outright excess to extremes of subtlety, and was somewhat disappointed that the film was not what I'd expected to see. I was also rather distracted by the thought that all my friends would think I'd lied about what sort of film-maker Wong was, to trick them into seeing a super-slow art film. This didn't leave the best impression with me, and I observed at the time that I'd have to watch it again with properly adjusted expectations to properly evaluate it. Working at a Wong Kar Wai-like pace myself, it's taken me just short of five years to be in the mood for IN THE MOOD FOR LOVE again. In the mean time I've seen the film acclaimed world-wide, winning countless awards and being treated to special editions from prestigious DVD firms that no other WKW film has been lucky enough to deserve. I've heard the film described as Wong's masterpiece by more than a few people, some of whom have actually even seen his other films beforehand. Wong is no longer the maverick young director equally loved and loathed by the cult audience that had seen his films, he's now a worlwide commodity if not quite a household name. In short, IN THE MOOD FOR LOVE has made an impression.

All of which context and preamble is basically the lead-up for me to say: I've watched the film again, and I still don't get it. I knew as well as I possibly could what to expect from the film, I'd revised DAYS OF BEING WILD a few days earlier so that I could spot any references or commonality between them, I'd waited until I was in the right mood for something a little bit slow & artsy... and the film left me as cold or colder than it did five years ago. Yes it's pretty, but not in the same way that Fallen Angels or Ashes Of Time or even DAYS OF BEING WILD are pretty. Yes the acting from Tony & Maggie is top notch, but the characters are kept at such a distance from the audience by the film that no amount of acting is going to make you feel particularly close to them, to view them as flesh & blood people or to imagine yourself in their shoes. Since the film basically features those two characters on screen for 90 minutes, mostly doing rather mundane things, you need some sort of connection to them to become immersed in the film and forget you're a person lying on a bed in 2005 with a bit of a lingering cold, watching a DVD. I didn't get that from IN THE MOOD FOR LOVE at all... it raised no emotions in me except a little boredom, and curiosity as to whether I'd enjoy the film more if I pressed the Fast-Forward button on my remote.

Perhaps it's me... perhaps I'm just still not ready for the film. I can't empathise with the characters or their situation, can't really imagine what they're going through or how they feel... perhaps one has to have been married to 'get' the film? I don't think that's it, though, but I am definitely at a loss as to why it is so universally praised and adored. The cynical side of me can't help suspecting that critics in particular like the film because they know it's the sort of film they're "supposed" to like - slow and inscrutable - because that's what distinguishes them from the common people, who are simply to crude to understand art. But then there are people I like and respect who seem to like the film quite a bit too, so I grudgingly have to admit there must be something to it that simply doesn't work for me.

One thing that is noticable when watching DAYS OF BEING WILD and IN THE MOOD FOR LOVE is the recurring symbol of a clock, and the implication that the film wants to say something about time. The coda for the film seems to comment on the futility of trying to live in the past, since one can never return to it - "He remembers those vanished years as though looking through a dusty window pane, the past is something he could see but not touch, and everything he sees is blurred and indistinct". The "message" of the film could be read as "missed opportunities stay missed" (and therefore should not be missed when they arise?). If this is what Wong Kar Wai wanted to say with the film, it's somewhat ironic that he returned to a decade-old film to say it :p He seems to be ignoring his own advice still, returning to the same characters/themes in his follow-up to ITMFL, 2046.I still haven't seen it, but general consensus seems to be that he shouldn't have bothered - even Christopher Doyle recently opined that 2046 was "unnecessary". Personally I'd extend that comment back to IN THE MOOD FOR LOVE too :p