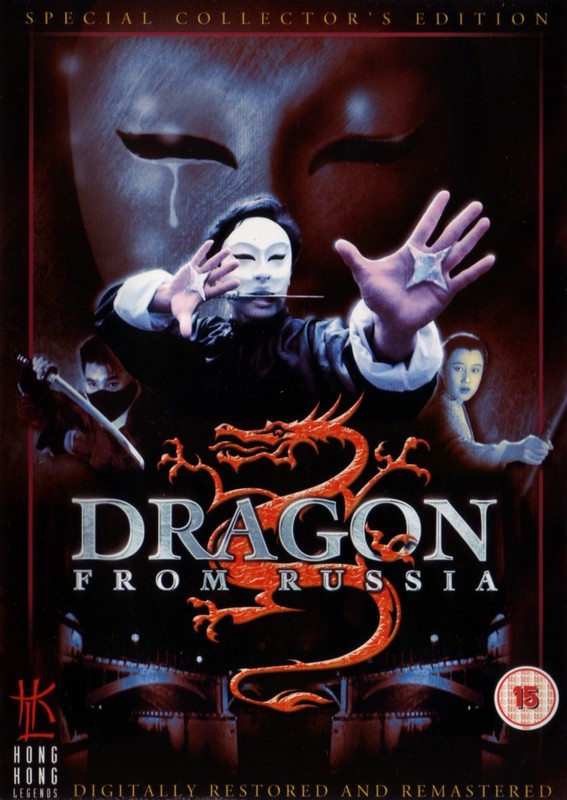 Well, what a difference a new set of subtitles can make! The Mei Ah release of DRAGON FROM RUSSIA had simply some of the worst subtitles I've seen, making very little sense of the whole movie... it was still some madcap fun though. Now Hong Kong Legends presents the movie with an anamorphic transfer and new subtitle translation and it's like seeing a different film entirely. Suddenly there's a plot... there's drama, intrigue, emotion... and still lots of madcap fun on wires.

Based rather loosely on the Japanese manga Crying Freeman, DRAGON FROM RUSSIA stars Sam Hui as a man kidnapped by a gang called the "800 Dragons", brainwashed and trained as an assassin. When called upon by the gang to kill a female witness who may be able to identify him, he decides he cannot do it - which by the gang's rules means he must die too. That's the bit that DFR shares with CRYING FREEMAN anyway, but it takes a lot of liberties with the plot, including a whole lot of brand new backstory to Sam Hui's character.

Clarence Fok gets a lot of hating, and to be fair he has made some dreadful movies... which is strange, because there was a period from 1988 to 1993 where he looked to be one of Hong Kong's most interesting directors. First came Iceman Cometh, a fun fantasy film with stunning visuals and inventive action. This led Cinema City to commision him to direct DRAGON FROM RUSSIA, which pushes even further into the heavily stylised camerawork and lighting, and pushes the action to delirious levels. The action choreography from Yuen Tak (who also finds time to play 2 roles in the movie) is tremendously inventive, featuring some of the most clever and intricate wirework you'll see - and it should be noted that this movie came out before Swordsman and Once Upon A Time In China made this kind of wirework so popular.

Sam Hui always seemed like an unlikely choice for an action lead, given that he was already in his 40's and best known as a cantopop singer and comedian. In 1990 he had the lead role in DFR and SWORDSMAN though, both of which he handled very well. His physique here is pretty impressive, and he does a capable job with the fights (doubtless with the aid of some stunt doubles). Yuen Tak has spent more time behind the cameras than in front of them, which is a real shame because he has a lot of presence in both the roles he plays here (though as the Master Of Death he's under so much makeup you wouldn't recognise him). His training as one of the Seven Little Fortunes really shows in the action scenes too, looking far more professional than Sam Hui. I wonder why he didn't get more substantial roles?

There's a bevy of babes in the movie, including Maggie Cheung in one of her early "little girl" type roles, Loletta Lee (who really was a little girl at the time, but is quite adorable), Nina Li and Carrie Ng (just as sultry here as in Naked Killer).

I wasn't too fond of DRAGON FROM RUSSIA when I first saw the Mei Ah disc, but I always suspected that it was severely hurt by the terrible subtitles. The HKL disc proves me right, and does the film infinitely more justice. In fact I'd say it elevates it from "interesting curio" to "medium-level classic". Certainly it's a fine example of the kind of movie that only Hong Kong seems able to make - fast paced, visually super-stylish and tremendously inventive action scenes.