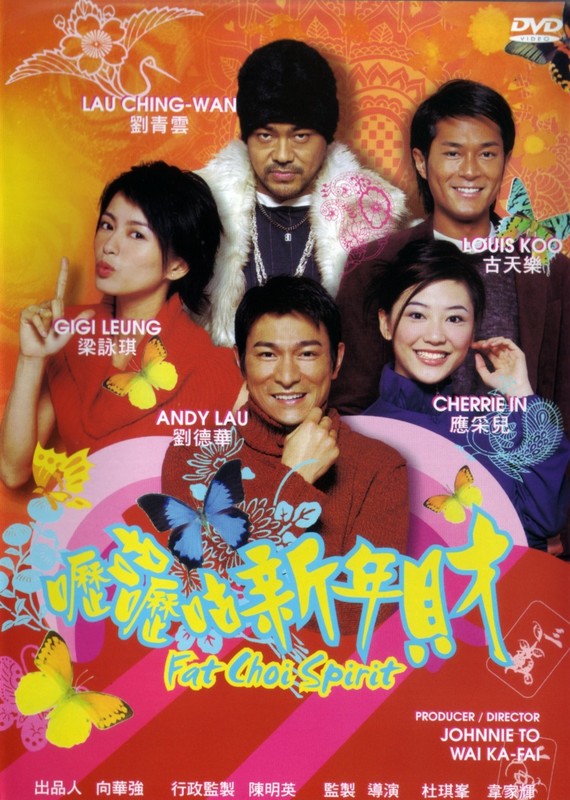 It's quite sad that after the last couple of Milkyway efforts (Running Out Of Time II and Fulltime Killer), the names Johnnie To and Wai Ka-Fai on the credits had started filling me with apprehension rather than thrill. This lowering of expectations probably paid off though, as I am no longer expecting miracles from the duo... and was hence able to enjoy FAT CHOI SPIRIT quite a lot :)

I'm not sure quite when they made the movie or how long it took, as it's hardly any time since ROOT2 came out, and there was seemingly no publicity about it before it was hitting the screens already. It doesn't look as if effort or time were skimped on though, as the production values are pretty high... certainly much higher than previous New Year effort Wu Yen. The humour here is a little reminiscent of WU YEN... the wilful overacting & the exaggerated sense of melodrama... but it's less silly overall, and contains none of the elements that some people found puerile. In fact I think the humour here was very well balanced, even though I'm sure I missed quite a bit due to lack of language/cultural knowledge.

The main place where I felt my ignorance was the mahjong games... a pretty large part of the movie, admittedly. Fat Choi Spirit is reminiscent of, if not quite a parody of, the God Of Gamblers family of movies. Here, Andy Lau plays the Mahjong Warrior, a man with extraordinary skills at mahjong... Lau Ching-Wan and Wong Tin-Lam play the father & son (not in that order, obviously) team of mahjong conmen who become Andy's rivals. There's a lot of mahjong showdowns here, all filmed very dramatically with excellent camera work being utilised to build the tension until it reveals... a bunch of tiles that mean nothing to me. I could pretty much tell when a hand was good from the soundtrack & camera work, but all the shouting of "pong" and "kong" and exchanges of tiles went right over my head. The cunning and skill being utilised by the players, and the cruel or amazing turns of luck with the tiles was easily deducible from the same cues, but quite why a green dragon here was a disaster and 4 circles there turned the whole game round... no idea. If you're planning to see this movie, I would advise going on line and trying to find out a little bit about Mahjong (if you don't already play it), because the movie would definitely make more sense. Still, not having a clue about the games has never stopped me enjoying the HK gambling movies, and this was no exception.

The strongest aspect of the movie, as with any good movie, is the characters - and the performances that embody them. To & Wai assembled a great cast for the movie - admittedly borrowing much of it straight from La Brassiere. Andy Lau is obviously the central figure and the box office draw for them. His character isn't much of a stretch for him - just your average cool, smooth but decent Andy Lau character really, so he plays it well with ease. Lau Ching-Wan is probably the highlight of the movie though, playing well against type and loving it. As Wong Tin-Lam's spoilt son he gets to indulge in wonderful temper tantrums and generally play the fool, which he does well. Gigi Leung also seems to relish the chance to indulge in similar tantrums and odd behaviors as the 'quirky' (mad) love interest for Andy. Not sure who the young lady is that plays Louis Koo's love interest - she isn't called upon to do a lot of acting... but she's basically a very pretty wallflower - every movie needs one somewhere :D

After Lau Ching-Wan, the other standout character is Andy Lau's mother. Her Alzheimers and Mahjong addiction give her some wonderful moments, and the the actress that plays her does a great job. Very likeable. Special mention to whoever the director of photography was too, as there is some quite fantastic camera work here.

The Milkway main duo have managed to produce a movie that has pleased me plenty for Chinese New Year 2002, which is hopefully a good sign that we're going to get more gems from them in the coming year. The minute I hear they're going to make a FULLTIME KILLER 2 or ROOT3 I'm going to desert them for good though!