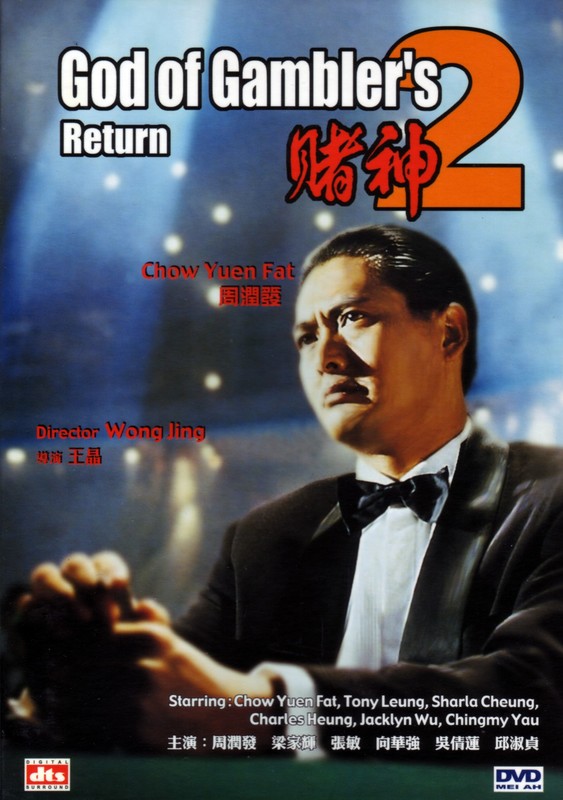 5 years after the box office success of God Of Gamblers, and after many name only-successors, imitators, spoofs and spin-offs, Wong Jing decided to make the first 'true' sequel. i.e. the only one to actually feature the God Of Gamblers (Chow Yun-Fat).

The sequel follows much the same formula as the original - a mixture of action, comedy, melodrama and those stylised gambling sequences where each bet would be enough to end world poverty, and the gamblers rarely get less than a picture card. In GOGR though, these elements are all cranked up to 11. Subtlety is straight out of the window, and characterisation is minimal. In this respect, the movie is weaker than the original. It doesn't have the same depth & roundedness.

It does have an all-star cast, however. Elvis Tsui nearly steals the show in one of his finer performances, and wonder-kid Tze Mui comes even closer (wonder where he is these days?). Chingmy Yau has her best role since Naked Killer, whilst Wu Chien-Lien has one of her worst. Tony Leung Ka-Fai gives a good performance, but not his best, and Blackie Ko has a small but adorable role to play too.

Like the original, this movie starts with some action - here we have a very nicely choreographed assault on Ko Chun's Paris mansion, with Charles Heung and Chow Yun-Fat defending it in the best John Woo style. All the action has a pretty unpleasant result in the end - Cheung Man suffers even worse here than in the original. There was no particular need to be so nasty, but this is not a movie that depends much on subtlety. There's another similar action sequence towards the end that's even more A Better Tomorrow II than the opener... both sequences are very well choreographed and filmed, pretty much up to Woo's standards in fact.

After the action we get a fairly extended departure into comedy again, and this time round the comedy is firmly into the realms of slapstick - not as human as the original, and sometimes a little incongrous (when it crops up in the middle of an action scene for instance).

There isn't as much actual gambling in GOGReturns, but the requisite big match at the end is suitably dramatic and stylishly filmed. The stakes this time are even bigger, and the gambling even more cunning and sophisticated.

I think Wong Jing knew that it would be hard to recapture the essence of the original movie, and chose instead to just paint everything bigger and brighter and try to dazzle the audience. It works quite well in this respect, though the good characterisation of the first movie is missed a little. All in all, it's certainly good popcorn fodder - though less likely to stick in the memory after viewing.