When I re-watched FAREWELL MY CONCUBINE recently I was surprised that it was much less political than I remembered it being. Turns out that's because I'd somehow merged that film and TO LIVE together in my poor muddled brain. Both have some similarities, beyond the common appearance of Gong Li, but TO LIVE definitely confronts the political (I should really say "social") aspects of the decades they cover much more directly and forcefully.

TO LIVE (aka LIFETIMES) basically covers 3 or 4 decades of one family's life in China, in a period that saw not one but two revolutions, and looks at the effect the social upheaval had on ordinary people's lives. The film rarely criticises the political movements instigated by Mao Tse Tung, but does an effective job of showing the hellishness of a society that has been turned on its head, where the people are forced to change not just the way they live but the way they think, and people are forced into social relationships that are new, and quite possibly against human nature.

I hope I won't jeapordise my visa if I admit that I had strong leanings towards Communism when I was younger, having read Marx in philosophy classes. His picture of a society without private possessions or social hierarchy did seem very appealing, but Marx acknowledged that the only way for such a society to work was if every member saw the value of it and willingly took part in it, and admitted that the only way that was likely to happen was via massive revolution - i.e. killing everyone that didn't agree with the plan. As a teenager, that didn't seem like such a big price or problem . 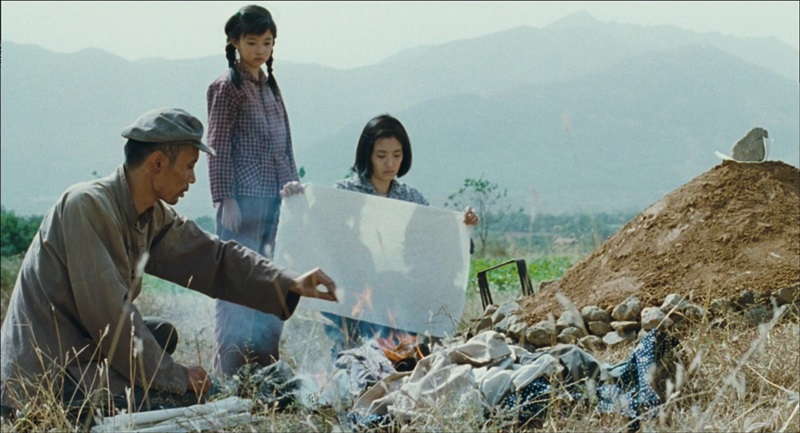 Certainly I'm not the only person to have considered this price worth paying, and a couple of people have actually put the plan into practice - lamentably with less than stellar results. Mao Tse Tung is, I guess, the undisputed king of Communist revolution, having led TWO of them in China, and probably disrupting more peoples' lives than anybody else in history in the process. TO LIVE gives those of us that haven't had to live through such conditions some idea of what it might have been like. People used to the cushy capitalist western lifestyle might wonder just how on earth people can live through conditions like that, but that's what the film wants to say... life might deal you some shitty hands, but people are remarkably adaptable and resilient, and you've just got to try to live the best you can. It sounds remarkably trite put like that, but the film does a good job of expressing it.

The film is based on a novel, with the author co-writing the screenplay as well. Zhang Yimou directs brilliantly as usual, which in this case is to recognise the strength of the story and characters and to back off a little, giving them space to live their lives. Although the film looks great throughout, the cinematography is quite unobtrusive. He once more elicits a great performance from Gong Li and the rest of the cast, with leading man Ge You giving the best one of all. The film has occasionally been criticised for piling too much tragedy on, but this is never done in an exploitative/manipulative way, and Zhang Yimou avoids turning to melodrama to evoke an audience reaction... which makes him all the more likely to get one (and without the audience feeling used afterwards).

In a career full of magnificent films, TO LIVE stands as one of Zhang Yimou's finest moments. The film is epic yet remarkably simple, and the execution is as near to flawless as I've seen. Zhang Yimou surely ranks in the world's top echelon of film-makers. Long may his life and career continue :)