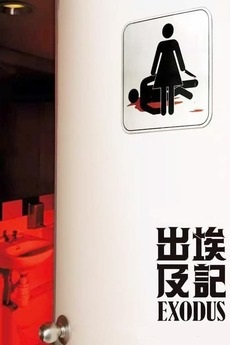 Sergeant Tsim (Simon Yam) is working as duty sergeant one night when a voyeur named Kwan (Nick Cheung) is brought in, having been caught filming in a women's toilet. Tsim takes Kwan's statement, in which he claims that he was in the toilets not to perv but to gather evidence that a secret society of women are out to kill all men. Clearly crazy talk, but Tsim takes it all down faithfully.

A while later Tsim receives a message that the evidence room lost Kwan's statement and he has to take it again. This time Kwan simply says he is a filthy pervert and that's all there is too it... but he looks frightened.

Tsim asks whether Kwan received any visitors between statements, and discovers that the head of the evidence room, Madam Fong (Maggie Siu), visited him right after his first statement was handed in.

Could there be more than paranoia to Kwan's conspiracy theory?

I somehow missed EXODUS on its release, and only discovered that it even existed fairly recently, so I'm finding it a little bit hard to place it in the context of Pang Ho-Cheung's development as a film maker. The film before it was Isabella, which was an unexpected diversion into arthouse drama after baudy sex comedies like AV (Adult Video) and Men Suddenly in Black. EXODUS is still on the arthouse side of things, and certainly isn't a sex comedy, though it is a comedy... of sorts.

The comedy in the film is situational, not laugh out loud stuff, and tends towards the black. Quirky is a more applicable adjective than funny. It's a bit surreal, starting with the opening shot of almost nude men in scuba masks beating up a man in front of a portrait of the Queen, in glorious slow motion (a scene whose relevance isn't explained until the very end of the film).

EXODUS is almost entirely character driven, and Pang gets great performances from the cast. Simon Yam is on screen for almost the whole running time, and clearly enjoys the opportunity to develop his character in depth. Annie Liu is really good as Yam's wife as well, but whilst Nick Cheung is on screen less than either he probably leaves a stronger impression... this must have been one of the first films to show that Nick Cheung had actually grown into a real actor. Cheung is at his best playing slightly crazed down and outs, and EXODUS gives him a great character to work with, if not as rich or iconic as his role in BEAST STALKER.

The film is artfully shot, if understated, with some interesting camera placement that often sees characters off on the periphery of the frame, which I guess symbolises that they are quite minor characters in their own lives. It's not a film that leaps out and grabs your attention, visually or in any other way, but it has been put together with a lot of attention to detail.

EXODUS is sharply written and well executed but it still feels like quite a minor entry in Pang's filmography, perhaps just because it's a very small scale production. It was never going to be a commercial hit, but I'm sure played quite a few international film festivals and I expect it was generally well received.

Pang's diversity is one of the things that makes him interesting as a director, and even if EXODUS isn't one of his most successful experiments I'm sure it contributed to his growth from attention grabbing Young Turk to a genuine auteur capable of making films like Aberdeen.

Worth a watch for fans of his work.