Directed by
8/10 - Trashy but demented fun 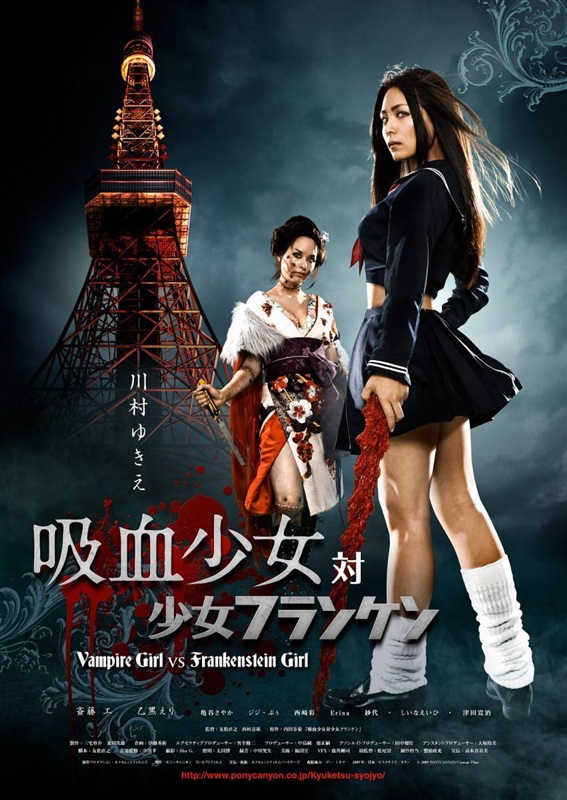 Implausibly handsome high school student Mizushima is the subject of much attention from his female classmates on Valentine's Day - particularly Keiko, the leader of the Gothic Lolita clique - but it is the pretty but anonymous transfer student Monami who gets to give him her chocolate (the Japanese tradition).

Mizushima notices that the chocolate seems to be filled with blood, and Monami explains that she is in fact a vampire - and after consuming her blood he is now half vampire too, and could be more if he commits to stay with her. Keiko does not respond well to Monami stealing her desired man, but is no match for a vampire. Luckily her father, the science teacher, has been doing forbidden research in the tradition of his idol Dr. Frankenstein.

The film starts at the end, with Vampire Girl Monami facing a group of Frankenstein Girls in an outrageously bloody battle, then cutting back in time to tell us the story of the events that led to this situation... culminating in an even more bloody and bizarre battle. 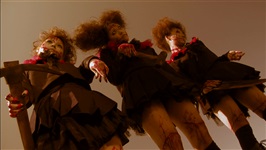 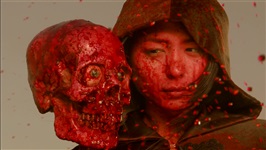 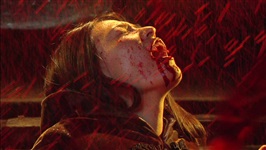 It's a film that's knows it is trash, but is determined to be entertaining trash. It's goofy, absurd and quite outrageous, e.g. the school is populated by various subcultures that include the wrist cutting club, practising furiously for the National Wrist Cutting Championships, and the Ganguro girls - Japanese girls made up as grotesque caricatures of Africans, based on a real Japanese phenomenon where girls would wear black-face as fashion.

Then there's the sexy school nurse and the mad scientist, both of whom seem to be having tremendous fun with their ridiculous roles and outfits, and an amusing cameo from director Takashi Shimizu as a Chinese teacher who gets distracted telling his class about the JU-ON movie franchise.

VAMPIRE GIRL VS. FRANKENSTEIN GIRL is one of the less celebrated films from gore maestro Yoshihiro Nishimura, perhaps coming out a bit late in the Sushi Typhoon wave that rather saturated the market for this sort of film (in the UK, at least). It follows a familiar template, a simple tale of high school jealousy that sets the stage for Nishimura to unleash his vivid imagination and talent for practical effects. 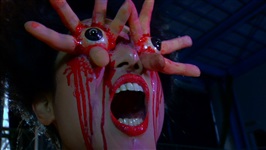 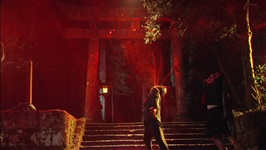 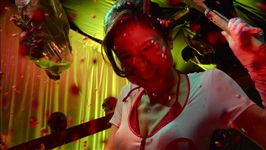 Nishimura was clearly in fine form on this film, which features some insane and extremely inventive gore and creature design, but I suppose by this point audiences were taking his talent and ingenuity for granted, after a deluge of films in which he set a very high bar for low budget overkill. It's perhaps true that you never really fully appreciate what you have until it's gone, and films like Ghost Squad serve as an excellent counterexample demonstrating just how good Yoshihiro Nishimura is at his job.

That sounds a bit like an obituary - to be clear Nishimura is still around, but after an incredibly prolific period from 2007 to 2012 his output slowed down dramatically, with only Meatball Machine: Kodoku giving him a real opportunity to flex his imagination in recent years (which he at least does in spectacular fashion in that film).

I'm not familiar with the name of co-director Naoyuki Tomomatsu, but looking at his filmography it seems that he has been quite prolific in the field of low budget trash, mostly of a rather pornographic nature if his five entries in the RAPE ZOMBIE series are any indication... his 2018 film SCISSORPENIS sounds like it might be worth tracking down though!

VAMPIRE GIRL VS. FRANKENSTEIN GIRL is perhaps one of the less memorable films from the J-Splatter boom years, but only because there was such a wealth of equally entertaining films coming out at this time and it didn't quite do enough to stand out. Now that we are in a relatively lean period for outrageous gore it's perhaps worth a revisit and a re-evaluation.