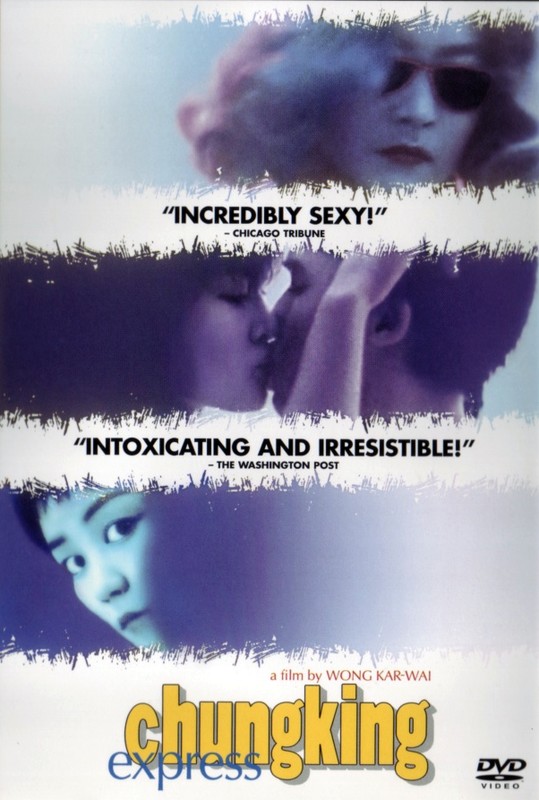 Wong Kar-Wai has a general disdain for plot that I find quite admirable. His films are all about characters. Chungking Express features a few main characters. Takeshi Kaneshiro can't get over losing his girlfriend so he buys pineapples. Brigitte Lin's drug deal goes sour so she is on the run. Leung Chiu-Wai can't deal with change, and also can't get over his girlfriend. Faye Wong... well, Faye Wong in Chungking Express just has to be seen

Chungking Express was made during a break from post-production on Ashes Of Time, as Wong Kar-Wai needed to distance himself from that troublesome project for a while to get his bearings and recharge his batteries. The result is the antithesis of the dark, brooding epic... a light, fluffy and upbeat little film that is like a little ode to Hong Kong's streets and people. It shares themes of loneliness and the difficulty of sharing the planet with other people, but seems a little more optimistic that the task isn't always doomed to futility.

Chungking Express definitely feels like pop-cinema, but has more than enough artistic ambition in it too... a very different kind of art film from the slow & ponderous films that most people think of when the term is mentioned. It's full of life and energy, and undoubtedly one of the "coolest" films of the 90's.

Much of the film's energy and style come from the visuals, where Wong Kar-Wai and Christopher Doyle seem determined to make every shot unique and beautiful. Some of the camera positions and movements are nothing short of genius. The camerawork is well complemented by innovative editing and an eclectic soundtrack. The film undoubtedly owes a lot to the more experimental film-making techniques that are usually found in music videos - or perhaps the film's style has just been a massive influence on half the music videos produced since (my chronology isn't too sharp when it comes to music videos I'm afraid). Whatever it's influences, the look of the film is totally unlike anything else from Hong Kong before it.

Of all Wong Kar-Wai's films, CHUNGKING EXPRESS is probably the most readily accessable and the most commercial. Despite it's innovative and eliptical story-telling and its philosophical leanings, the film is so infectiously energetic that it's hard to imagine any audience not enjoying it. A lot of the credit for this has to go to Faye Wong, who just shines as the bouncy little imp in the second half of the film. I defy anyone not to fall in love with her after watching it.

Chungking Express is surely one of the most imaginative, unique and influential films of the 1990's, and one of the most enjoyable. Its effect on the Hong Kong industry was palpable, and in some ways quite negative I think. Suddenly everybody had to worry about whether their films were *artistically* accomplished, as well as whether they were commercially attractive or not. I think this was a problem for a lot of HK film makers, who were left quite lost and unsure of themselves. Yes, I don't think the handover or the economy are the real reasons for the decline of Hong Kong Cinema since the late 90's... it's all Wong Kar-Wai's fault! Poor Tsui Hark has never been the same since CHUNGKING & ASHES OF TIME hit the theatres anyway.

So, in conclusion, just in case there's anyone out there that hasn't seen Chungking Express yet.... shame on you! Go buy it right now!