Directed by
Genre
Life is Pain 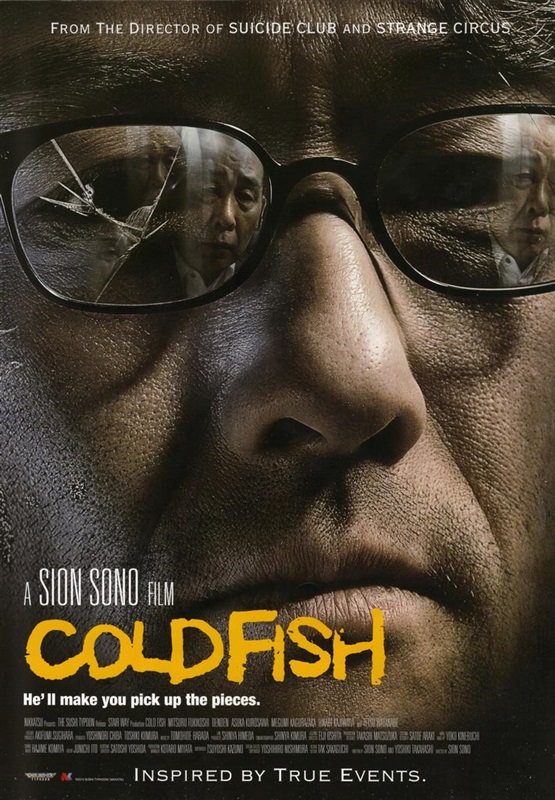 The Shamoto family run a small tropical fish shop and lead a dull life - except perhaps for daughter Mitsuko, who resents the presence of the pretty young stepmother that arrived not long after her real mother died and acts up accordingly.

Everything changes when they meet Murata, the charismatic owner of a much larger and more successful tropical fish shop, who takes the Shamoto family under his wing. Mr. Shamoto soon discovers that the source of Murata's wealth is less tropical fish and more conning people into investing their savings in his business and then bumping them off.

With threats to his wife and daughter's wellbeing if he doesn't comply as incentive, Murata begins grooming Shamoto as his new partner in crime.

COLD FISH is inspired by a real life crime, and is the middle part of Sion Sono's nominal Hate Trilogy, bookended by Love Exposure and Guilty of Romance. It is another exploration of the dark underbelly of human nature, this time presenting a killer who has no remorse and no compunctions about using and manipulating those around him.

Murata is a wildly over the top character, overconfident and overbearing, bullying people into doing what he wants as much by force of personality as by threats and violence (though he's liberal with those as well). Shamoto is the exact opposite, timid and conflict averse, and easily steamrolled by Murata - or even his own teenage daughter.

A common thread in much of Sion Sono's work is that of the failures of the conventional family unit. Murata is able to sweep in and basically take over Shamoto's family because they were only really bound together by the conventional roles that society set for them, and Murata's rejection of societal conventions shows them how weak those bonds are.

I thought I had seen COLD FISH before but couldn't remember anything about it, and now I think that I must never have actually got around to watching it because I'm sure I'd have remembered it. It's as if Sono watched Takashi Miike's Visitor Q and thought "That, but without the happy ending" (and about twice as long). The descent into depravity is remorseless once it starts, leading to a blood soaked conclusion that would be hard to forget, with gore levels approaching those of Ichi The Killer.

It's obvious now that Murata was the template for Joe Murata in The Forest of Love, and of all the self-references in that series COLD FISH is probably the most prominent. Denden's portrayal of a charismatic monster is simultaneously charming and chilling, as the character's unpredictable moods sweep everyone around him up in his storm.

I suppose that having watched THE FOREST OF LOVE meant that COLD FISH made less of an impression on me than it would if I'd seen it in 2010 (which I certainly could have done, since it was one of the more readily available Sion Sono films). Even having a fairly good idea how things are going to play out there is still plenty in the film to shock and intrigue though.

Cinema is life, and life is pain.