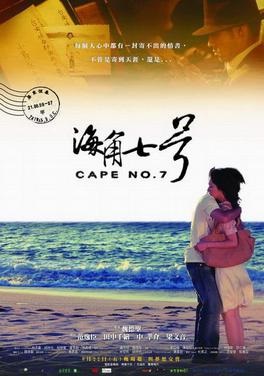 A charming, sentimental film about the attractions of rural life and community in Taiwan's more provincial Southern parts, and the trials and tribulations of teenage life and romance.

Constructed around the formation of a local band to perform as opening act for a visiting Japanese singer, the story follows a pretty standard pattern (like a sports underdog movie) but creates some memorable characters, and takes full advantage of the beautiful scenery of Taiwan's tropical tip around Heng'chun.

It's fluff, but competent and enjoyable. Only the romance angle falls flat, due to a lack of chemistry between the leads, or any convincing reason why they would fall for each other. Otherwise, worth a watch, and has proven to be box office dynamite locally.

The film also gave an effective boost to Southern Taiwan's tourism industry... in fact I was one of many visitors to Kenting in the wake of the film's popularity. What the film doesn't show is the predominance of Thai restaurants and other Thai theming on Taiwan's most tropical tip. It is a small town, but a pleasant enough place to stay for a few days!