Directed by
Genre
It's holier than a hard-on. It's about love. 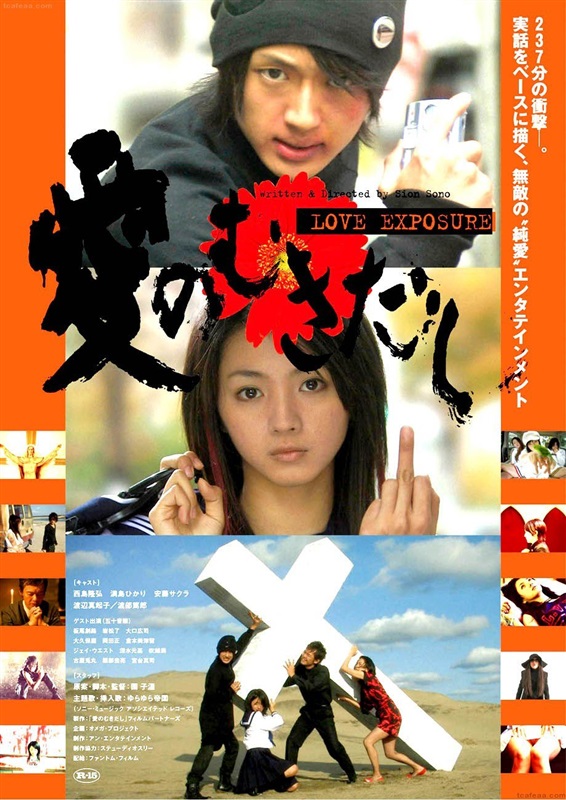 When Yu's mother dies young his father burrows deeper into his Christian faith, eventually being anointed as a priest. Yu grows up to be a gracious and kind boy. After a wanton woman insinuates herself into their lives, Yu's father starts to become more puritanical, demanding that Yu confess his sins daily - but Yu's good behaviour gives him little to confess. He realises that to please his father he must start to sin, and soon ends up in a youth gang that gives him opportunities to do so.

A colleague of mine once described LOVE EXPOSURE as "a four hour film about upskirt photography", and whilst I had to admit that was not not true, I suggested that it was rather underselling a film that covers quite a lot of territory in its substantial runtime. Despite it's length the film is never in danger of outstaying its welcome - quite the opposite in fact, even at four hours some sections feel abridged - indeed it has apparently been re-released in Japan as a ten episode TV series running some 40 minutes longer, and rumour has it that there exists a cut even longer than that. This was probably the intended form as the film is quite episodic and explicitly divides itself into five chapters of varying length.

A more complete description would be that LOVE EXPOSURE is a four hour meditation on love, family, religion and upskirt photography. It is Sono's magnum opus, the definitive form of the Sion Sono experience, and although his name was already on the map after Suicide Circle it was only after LOVE EXPOSURE that serious people started taking him seriously as a film maker. 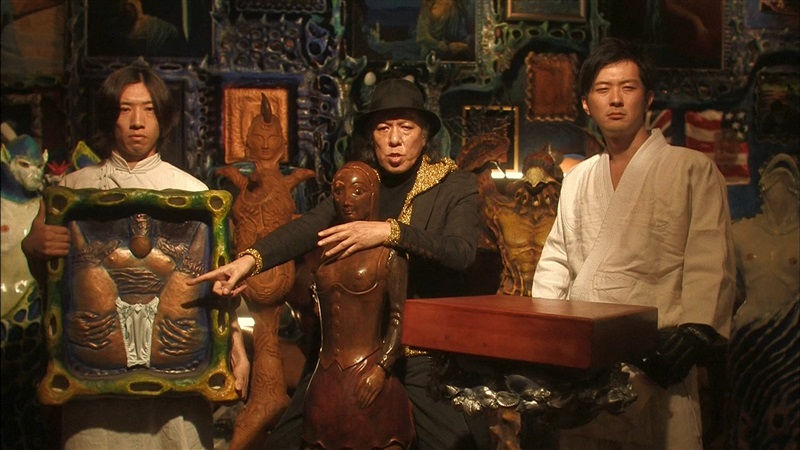 Yu is happily sinning with his martial arts inspired upskirt techniques but still remembers his promise to his mother to find his Maria (aka Mary). When he meets a girl called Yoko fighting a gang of thugs on the street he immediately recognises her as the one, and jumps in to fight at her side. Unfortunately Yoko was abused by her father and has concluded that men are all her enemies (except Kurt Cobain). Luckily Yu is in drag when they meet, for reasons, and Yoko goes away believing her saviour was a woman. 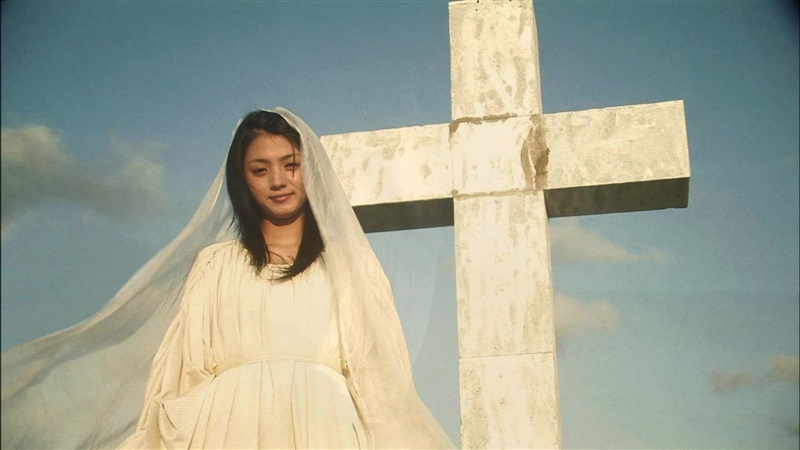 The path of love rarely runs straight, but everybody's lives are about to get a lot more complicated as Yu and his father have caught the interest of the Zero Church, a new Christian denomination with a charismatic leader that has all the hallmarks of a cult.

LOVE EXPOSURE is nominally the first film in Sion Sono's "Hate Trilogy", followed by Cold Fish and Guilty of Romance. The films have nothing to do with each other. except for the fact they all deal with damaged people living on the fringes of society. This is hardly unique in his filmography though, and LOVE EXPOSURE arguably makes more sense as the climax of a trilogy that started with Strange Circus and Noriko's Dinner Table. LOVE EXPOSURE is (sometimes) funnier than any of those films though.

In structure and in content LOVE EXPOSURE is probably closest to Sion Sono's recent Netflix extravaganza The Forest of Love - including the existence of film and serialised versions. This obviously isn't a coincidence as THE FOREST OF LOVE overtly references several films from Sono's past, serving as a sort of distilled Sion Sono primer, and LOVE EXPOSURE could hardly be excluded as his most renowned work.

Family is a recurring theme in Sion Sono's work, especially dysfunctional families, and LOVE EXPOSURE argues that shared blood is not what defines a family, rather it's the units people construct themselves as a buttress against a cruel world that constitute a true family, whether DNA is shared or not.

It's the only Sion Sono film I can think of that explicitly deals with religion, and it is as contemptuous of organised religion as it is of traditional families. Here the church is shown to prey on the vulnerable and to stigmatise people for having natural desires. It doesn't necessarily say that religion itself holds no value, indeed a passionate recitation of 1 Corinthians 13 is one of the film's defining moments, and Jesus is credited with being almost as cool as Kurt Cobain, but the human institutions built around it are viewed with distrust. 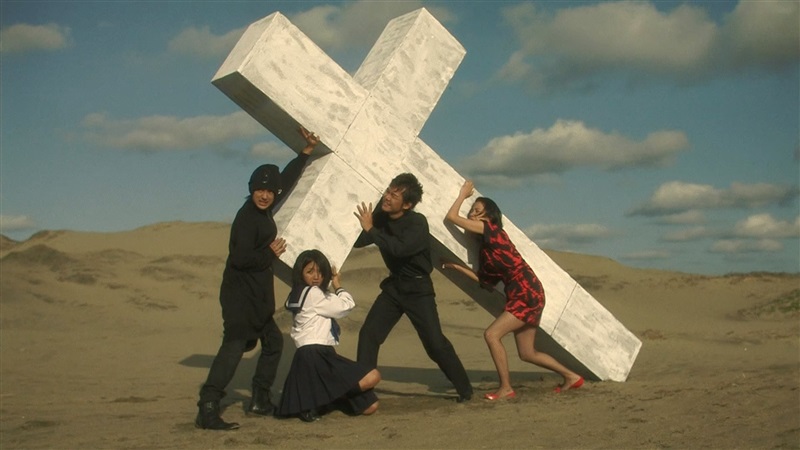 I don't want to go into too much detail about what happens in the film, as one of its pleasures is the journey it takes you on. It covers a lot of ground.

Sion Sono has a way of getting great performances out of his cast, especially it's younger members. Takahiro Nishijima is a hero for taking a role which is frequently undignified, to say the least - apparently this was his first film, so more power to him for letting himself be presented in this way. Sakura Ando also gives an interesting performance, but it is Hikari Mitsushima that most impresses, running through a wide gamut of emotions and giving her character life and soul... and panty shots. 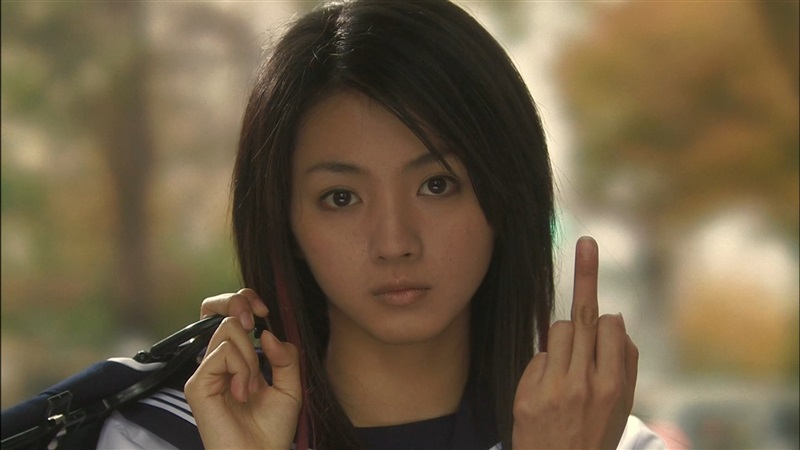 Whilst it isn't amongst Sono's most stylish films, he does always have a good eye for shot composition, and the film always looks at least good. It is sometimes a little surreal, with shots that are purely symbolic. The editing is very sharp and unusually rapid for a Sono film, with most scenes being composed of many short shots.

There is no doubt that LOVE EXPOSURE was a landmark in Sion Sono's career, being wider in scope and more sophisticated in execution than any of his previous work. It was certainly responsible for introducing his name to a wider audience and giving him the kind of guaranteed market that allows a Japanese director a certain amount of autonomy in choosing his future projects.

I think it was also something of a landmark in cinema generally, one of those films which expands the boundaries of what is possible... who would have thought you could make a four hour film about upskirt photography and become a celebrated auteur before this? 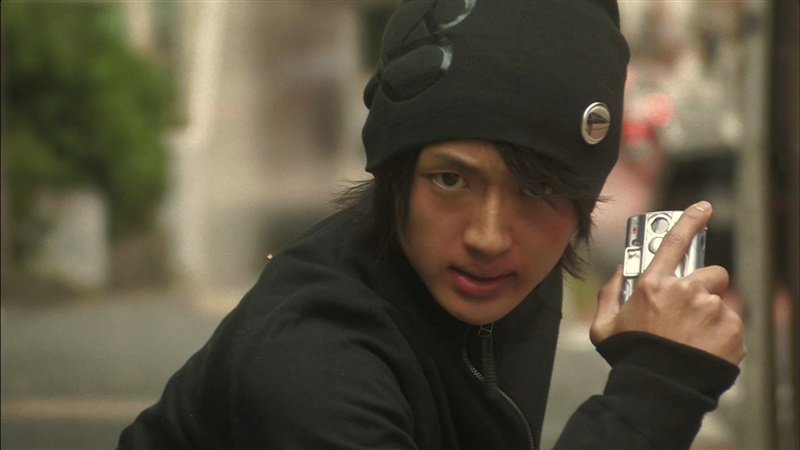